Mill Street as it appeared in 1889. This land was first purchased by a Mr. Coleman from the Morphy family in 1820. In 1822, Hugh Boulton purchased it and finished construction. The mill was later owned by Horace Brown as a flour mill. On the left-hand side are buildings used for the Boulton-Brown Grist Mill, and on the right-hand side is the residence of Horace Brown, grandfather of A. Roy Brown.–Photo–Carleton Place and Beckwith Heritage Museum

Life hadn’t been kind to Jim O’Brien. His wife ran off with his best friend and left Lanark County to find gold.  A letter from his wife informed him she was presently in San Francisco, having arrived aboard the Steamship Oregon on June 13, 1849 .

Mrs. O’Brien was part of a group called the Ogdensburg Co. of 10.  The letter mentioned a James Simpson, James Beckwith and a Mr. Nathaniel McCaffrey of Carleton Place. Jim knew Nathaniel but not the other two men. He wondered if they had run off with other men’s wives too. Jim’s daughter was dying of influenza and he too was struck down with the flu. Only a few dollars stood between him and starvation– but soon after his daughter’s death a minister helped him find work in the Bolton Grist Mill in Carleton Place.

A year later a well-dressed woman breezed up to his place of work on Mill Street and asked for Jim by name. When shown to the office she fell to her knees and begged his forgiveness when he entered the room.  It was his estranged wife, back from California, where his ex-best friend had made a fortune in the gold-fields. His wife’s former lover had died and now his wife wanted to pick up where they’d left off.

But this story was not to have a happy ending. She, herself, caught the dreaded influenza and died of pneumonia, leaving her husband £62,000 in her will. It is said today that when the moon rises high and the night is dark that her soul marches up and down Mill Street looking for her money– but most certainly not her husband. 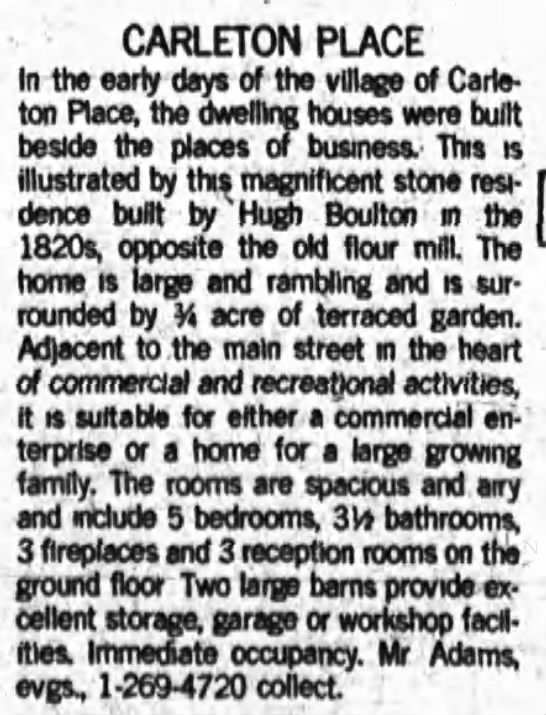