I used to joke with my son about my fear of clowns. It was at the point where he would sneak up on me and scare me to see my reaction. Now, there are many reports of clowns on the news who think it’s funny to chase kids and adults. You think if you were a clown you would want to be booked not blacklisted. However you can see the pull many people have to performing as a clown.

Victorian era circuses were a part of its culture as it was regarded as a form of entertainment. By the mid-Victorian period, there were numerous circuses which were running their shows in England.

The rise of circus from mere a performance of artists to being a form of entertainment for the Victorian people was because of its demand. During the Victorian period, only a certain class of society would watch the circus, but after its popularity all the classes watched it.

The impact of these circuses was so powerful that even the 19th century theatres included circus acts like jugglers, aerial acts, etc. Trapeze wires were strung from the roofs of these theatres and the artists would show their acts above the crowd of people sitting in the stalls.

The Victorian circuses included skilled artists who performed the dangerous tricks and the basic goal of these circuses was to create excitement amongst the audience. The circuses in the Victorian period showed the performances of their artists either inside a small tent or in the open air. 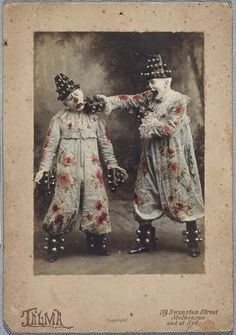 However, carrying on with the circus business was not easy. The circus industry was always torn between appeasing the regulator and the audience and at the same time trying to build some reputation for circus.

One of the key factors that helped circus become so appreciated was the fact that the entertainers or artists who performed at these circuses travelled from place to place for their audience, even if it was the smallest town. This touring circus was also known as Tenting circus, which became popular in the 19th century.

Recently I stumbled across an episode of The Big Comfy Couch on Youtube. If you’re not familiar the show was a Canadian children’s program featuring a young clown and her daily life in a world filled with puppets and other clowns. From an artistic and theatrical standpoint it was quite well done.

Honestly, I’m just amazed there’s still a thriving clown market out there. If you ever have a chance to witness a Clown Convention, I highly recommend it. The best part is that parking isn’t a problem, since all of the clown performers arrive in the same car…and that’s no joke:)