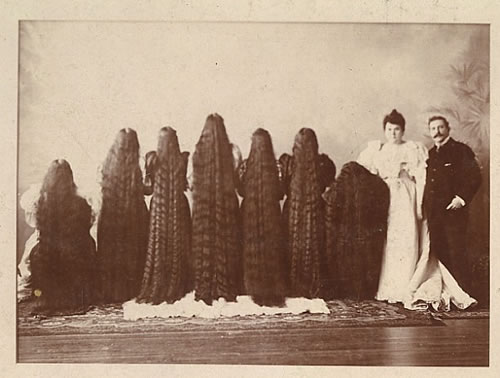 In 1884 Lois Lyman of Cabot, Vt. died leaving a strange sort of legacy. In the Almonte Gazette it was reported that she had begun to collect her hair fifty years ago for a clothesline.

A clothesline? I had a real hard time with that one so I began to dig in the newspapers archives. It turns out that Lois had indeed begun to plait the combings of her hair and had been turning it into a rope over a half inch thick. Apparently it became various shades through the years as her hair had turned materially during the half century.

The Alvord- Messenger in Texas reported that Lois had begun the rope in 1829 and when she died in April of 1884 it lacked just one inch of being over 100 feet long. No word on what happened to such a creation.

Are You Giving Me a Perm or Making Egg Sandwiches?