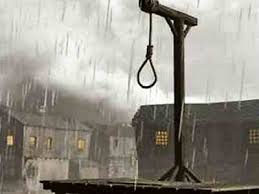 From Perth Historical Society and the Perth Courier

On the night of Monday, December 16, 1850, at Adamston, northwest of Renfrew, Francis Beare split the skull of his sleeping employer William Barry with an axe. Beare then stole Barry’s team and sleigh, loaded Mrs. Beare and their two small children, along with valuables stripped from Barry’s house, and set out for U.S. border. He was overtaken and arrested by Lanark County Sheriff Andrew Dickson (1797-1868) and Carleton County Deputy Sheriff James Fraser (1825- 1879) at Rose’s Inn in Montague Township near Smiths Falls. Tried jointly with his wife before a jury at Perth on May 2, 1851, Beare was convicted of murder and sentenced by Judge William Henry Draper (1801-1877)5 to hang. Although Beare later swore that his wife ‘made him do it’, Mrs. Beare was discharged.

An appeal to the Governor General for clemency was denied and on Saturday, May 17, 1851, Beare went to his death. At about half-past ten o’clock, Francis Bear, the murderer of William Barry, suffered the last penalty of the law by public execution in front of the Court House. The unfortunate culprit, with his arms pinioned, clothed in a white gown and cap, ascended the platform in front of the gallows with a firm foot. He had received the last rites of the Roman Catholic Church that morning from the Very Rev. J. H. McDonagh , and was accompanied on the platform by that reverend gentleman as well as by the Rev. E. Vaughan , of Ramsay, and Rev. Dr. Maddon , of Trent.

The condemned man knelt down in supplication and repeated in a firm voice the prayers of the church, after which he glanced at the crowd before him, but said not a word. He took his position under the gallows and his doom was sealed. In a few minutes, after a few convulsive struggles, all was over, his spirit had taken its flight to another state of existence. The body hung for about an hour, when it was lowered into a rough box of sufficient length to contain it, and conveyed for interment to the Roman Catholic burying ground.

There was nothing remarkable or striking in the personal appearance of Bear, at least nothing that could indicate that he would be guilty of the atrocious crime for which he forfeited his life. He was a man of about five feet six inches in height, with rather a slight frame of body, delicate complexion and youthful appearance, we should say about 25 years of age. He was French Canadian and his eyes were rather grey or a light blue, and had an unintelligent, unmeaning stare, which gave his countenance the appearance of simplicity; yet withal, a sullenness of disposition could be traced under it all. He was very ignorant and his intellect was of the lowest order. Since the trial and before the execution, he confessed having committed the murder, and that he struck two blows instead of one, as first supposed, in doing the deed; but insisted until the last that his wife had urged him to it.

There was a large number of people present at the execution and (how amiable, how consistent with the tender feelings of the other sex) a large number of respectably dressed females on the ground to witness the sad spectacle. This is the second execution that has taken place since the establishment of courts of justice in this district – a period of about thirty years.

As in the case of the Easby execution 22 years earlier, Beare died “in the presence of thousands”, but the event did not have the same carnival atmosphere and the Perth Courier thought it unseemly that “respectably dressed females” had been in attendance. Attitudes were shifting and much of the crowd was in fact hostile.

Sheriff Andrew Dickson found it impossible to engage a hangman at Perth or anywhere in the province. In the end he resorted to hiring a prisoner from the Kingston Penitentiary who agreed to do the job in exchange for a pardon. When the hangman (name unknown) mounted the scaffold he was jeered by the crowd and, as the heckling got louder, yelled back that “he’d hang them all for a shilling a dozen”. With the execution complete rumours began to circulate of a plan to lynch the hangman. The authorities smuggled him into the Registry Office and concealed him in the vault until he could be put on the afternoon stage to Brockville, by way of Smiths Falls.

So who hung Francis Beare? The mystery remains to this day.

The Tragic Tale of the Accidental Axe — Warning: Not All History has Good Memories