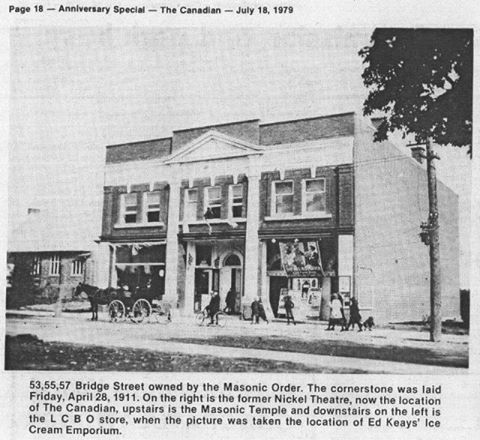 Photo-Masonic Lodge, St. John’s No. 63, located at 55 Bridge Street.
This newspaper clipping from 1979 shows the building in the 1920s-The LCBO moved into the building in 1945, paying a monthly rent of $45!-Carleton Place and Beckwith Heritage Museum

John Ross Robertson, of Deputy Grand Master of the Lodge of Canada, A .F. & A.M ., W . Bro. Toronto,  visited Carleton Place Carleton Place and delivered a carefully prepared address on “‘Craft Masonry in Canada. St. John’s Lodge-room was comfortably filled on the occasion, there being a full turn-out of the members of that lodge, as well as a large number of visiting brethren. Among the latter were a dozen enthusiastic Almonters, who were amply repaid for their unpleasant drive (there was a spring snowstorm) by hearing an address of rare interest.

The distinguished lecturer gave a condensed history of the order in, Canada for the
past century, interspersed with anecdotes, and read extracts from some of the minute-books of bygone days to show how lodge business was transacted in the pioneer period in this country. 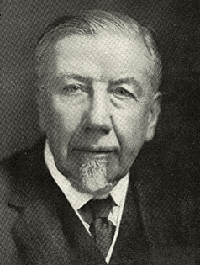 Some amusing incidents connected with the *craft during the Upper Canada rebellion in 1837-38 were related. The audience was delighted with the lecture, and at its close Rev. Bro. Jarvis moved, and W . Bro.Munro seconded, a hearty vote of thanks to the D. G. M.. which was carried unanimously. R. W. Bro. Robertson and the visiting members of the fraternity were afterwards entertained at a banquet in the elegant dining-room of Bro. Mcllquham’s hotel (Mississippi Hotel), where a fine spread Was prepared, and to which, it is scarcely necessary to say, full justice was done.

*Debates within Upper Canada on the nature of the relationship of the provincial Grand Lodge and the English Grand Lodge paralleled political discussions on the colony’s constitution. Those Freemasons who immigrated from the United States favoured an independent Provincial Grand Lodge.  Charles Duncombe was a Freemason, serving as first master of the Mount Moriah lodge at Westminster. In 1836, in a move that presaged the Rebellion, he set up a Grand Lodge independent from the British lodges and became its first Grand Master.[1]

Blaine Cornell added: Possibly Mark Rubin was actually Mark Rubino one of the Rubino brothers who owned the large brick building still standing at the NW corner of Beckwtih and Mill and imported fruit and vegetables from the USA during the 50’s,60’s and early 70’s