Remember the Kennedy house on High Street that was moved down the frozen Mississippi River to High Street in the middle of the winter years ago? Well in doing some research yesterday I found out the gentleman’s name that was in charge of the whole operation. The big then white frame house at one time was occupied by the Misses Campbell. The house originally stood in Ferguson Falls and was dismantled there and sent down the river to Carleton Place and erected on the present site.

To improve traction on the ice for both horses and men, a simple form of crampon was used. Shown in the photo foreground are two stirrup like devices which would have been tied on over a pair of boots, most likely one under the ball of the foot and another under the heel. The spikes would prevent a nasty fall. Two different styles of horseshoes are shown in the background. The one on the left has wedge shaped extensions that would readily dig into the ice while the other one has blunt metal extensions.
Still what a feat this must have been!

On Friday morning, June 3rd, death claimed one of the oldest of the residents of Ferguson’s Falls vicinity in the person of Thomas Quinn. On February 22nd, 1870, he was born at Ferguson’s Falls and lived on the farm there during his long life of ninety years. His genial and kindly disposition won for him a wide circle of friends and during the days following his death many persons who had known him called to offer their sympathy and prayers. The remains rested at Young Funeral Home and the funeral Mass was said, at the Sacred Heart Church in Lanark by the pastor, Rev. Joseph Healy. Burial was at St. Patrick’s Church Cemetery at Ferguson’s Falls. The pallbearers were Terrance Grey, Jas. Quinn, Francis Quinn, Francis Badour, Albert Forest, and Leo Quinn. He is survived by five brothers, William at Haileybury Hospital; James of Lanark; John, Frank and Charles of Ferguson’s Falls; and Sister M. Edward of Sacred Heart Convent, Arnprior.Among those who attended the funeral were his niece (Eileen) Mrs. James Mackler of Kirkland Lake; Leo Quinn of Cornwall; Loyola Quinn (Mrs. Desmond Piplonski) of Renfrew; Rev. Leo Hickey of Ottawa; Mrs. Hilda Hickey of Almonte; James P. Quinn and Miss Alice Quinn of Carleton Place.

The House that Skated to Carleton Place — Kennedy House 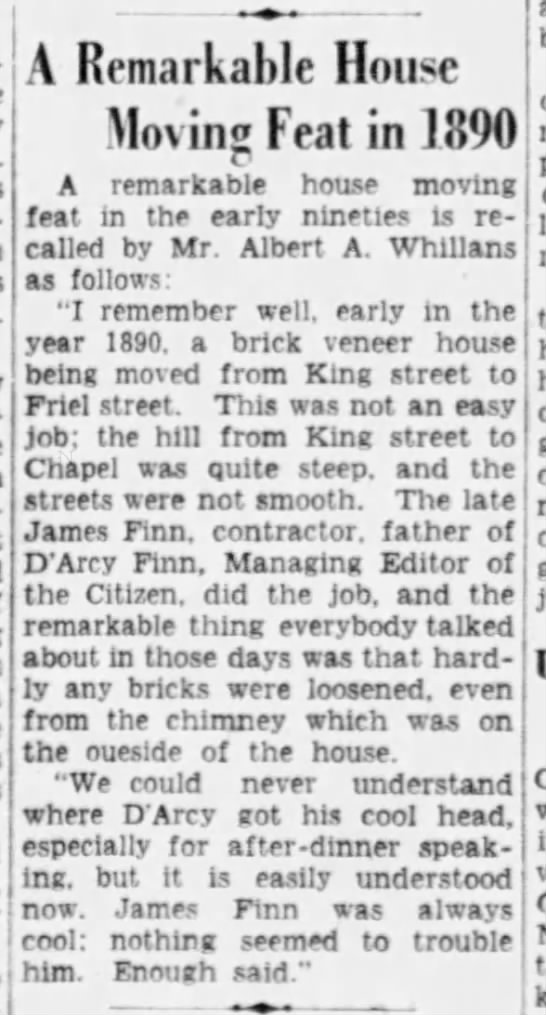