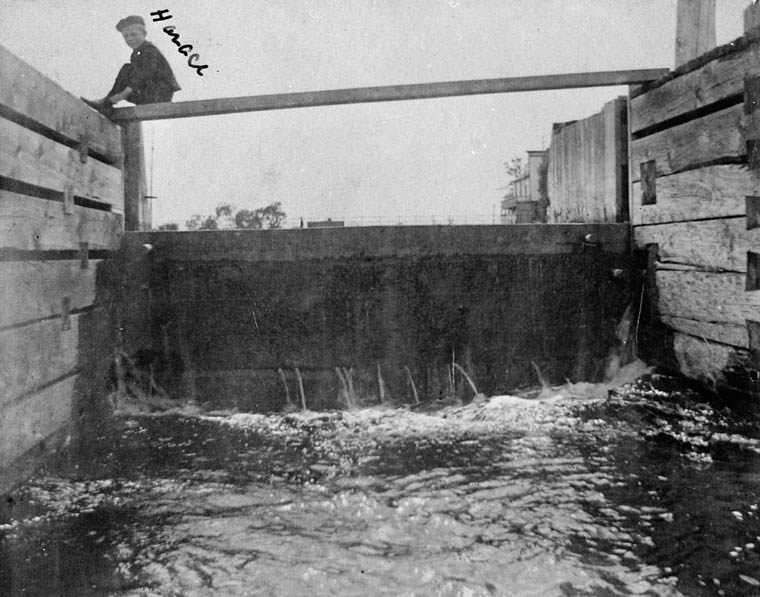 An old dam near Carleton Place was the only thing marked on this picture with the name Horace written on it. Could it be Horace Brown?

Horace Brown was the younger brother of A.Roy Brown and served in both the infantry and air force during the First World War. An avid photographer from a young age, he smuggled his camera with him to France and documented his wartime experiences.
Horace died in 1919 from the Spanish Flu.–Carleton Place and Beckwith Heritage Museum

Settlers of Upper and Lower Canada impounded small streams to power their grist and sawmills, sometimes also to float logs to market. Navigation on larger watercourses often required canals and locks such as the Royal Engineers provided to maintain depths and bypass rapids on the St Lawrence, Ottawa and Rideau rivers. Gradually projects increased in number and size as the new Dominion expanded westward.

But where was this in Carleton Place? You can see the edge of some homes in the distance

Wendy LeBlanc —Linda, if you look at the building on the right side you will see that it has a boom-town front and a balcony on the river side. I am quite sure that this photo was taken at our dam looking upstream and that the building, torn down about a decade ago, served a number of businesses notably Sinclair Brothers Men’s Wear, and more recently Lolly’s Tea Room and Goofy’s Ice Cream Parlour.

This photo of Winnie  the Pooh and Harry Coleman was taken at Salisbury Plain in 1914 by Horace Brown of Carleton Place. Brown, a member of the Canadian Expeditionary Force kept a diary and took many, many photos of his World War One experiences.