THE HOUSE OF INDUSTRY Photo– 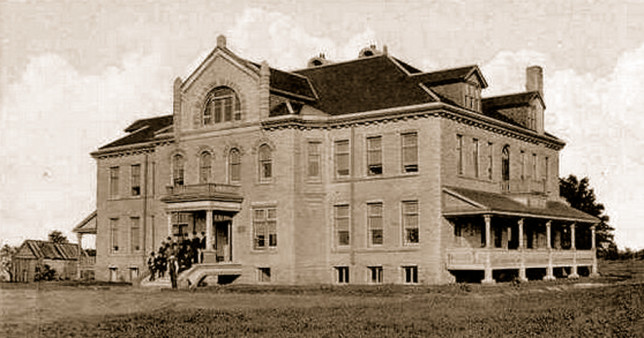 Last night I was watching “Who Do You Think You Are” featuring Molly Ringwald. She was devastated to find out that her Great Great Grandmother was born in a widow’s house. I thought it was ghastly until I found out we had Houses of Industry. Probably not as bad as that, but still sad to think these things existed.

Before the construction of this House of Industry in Perth the only alternative place to house indigent residents was in the county jail. This building was locally known as “The Poor House”.  It was described as “the finest House of Refuge in Ontario”. There were farm buildings in the back fields that lead down to the Tay River. In the early days was sustainable as a working farm. In 1948 it was known as Wiseman’s Chronic Hospital, Tayview Nursing Home in 1967 and since 1985 the building is home to the Perth Community Care Centre.

Reeve Foy reporting for the House of Industry Committee, urged the installation oi a suitable laundry at the House; The fact that in the neighborhood of 90 people require to have their washing done weekly in the House, requires no argument in favor of a complete and up-to-date laundry being installed. The Committee has gone into the matter and have had figures submitted for a complete laundry system which range from $800 to larger figures, in accordance with the size, etc., of the machines installed. The Committee therefore asked for authority to install a complete laundry system.

Care of Lanark County’s nineteenth century aged indigent residents without family or other private means of support was provided by the available public shelter, the county jail.  There a few respectable elderly citizens without friends or money could be housed and fed and classed as vagrants.  The Grand Jury report of inspection of this institution for imprisonment of alleged criminals related in part in December, 1880:

“The Grand Jurors for our Lady the Queen, have examined the jail and they find it in a very satisfactory state.  There are only two persons committed for crimes and these are of a comparatively trifling character.  We are glad to find there was only one insane person confined in the jail.  The rest are aged persons who have been committed under the Vagrancy Act.  Mr. Kellock who has filled the office of jailer for the last thirty years has resigned.”

The Lanark County House of Refuge was opened formally in 1903 when public figures of the county invited to speak at the ceremony, including Lanark’s members of Parliament, Hon. J. G. Haggart of Perth and Bennett Rosamond of Almonte, provincial members W. C. Caldwell of Lanark and Lt. Col. A. J. Matheson of Perth, Senator F. T. Frost of Smiths Falls and former provincial member Dr. R. F. Preston of Carleton Place.  The disappearing old order is seen in a Carleton Place editorial comment on the death of two residents of the county, one of Beckwith and the other of Drummond, in 1901 in the county jail.  Like others before them, they had been consigned to spend their last years in jail as provision for their maintenance in their helpless old age.

“What better arguments do our County Councillors want to warrant them in proceeding with the House of Industry than deaths in such circumstances?  Poverty, from whatever cause it comes, is not a crime.  The only crime of these two elderly citizens was their poverty, yet note their obituaries.”

A revolutionary plea for state support for the building of hospitals had been offered by the Carleton Place Herald in its first year of publication.  Its young editor of over a century ago suggested: (Feb. 7, 1851)

“Public Hospitals – The want of hospitals for the indigent infirm in this part of the Province is beginning to be felt as a serious inconvenience.  It has become a pretty heavy tax on the benevolent part of the community to be obliged to support those who are unable to support themselves.  We would therefore suggest the idea that the Provincial Legislature enact that a sum equal to that raised for the Lunatic Asylum should in like manner be raised for the erection and support of three hospitals, to be situated at the most convenient points in the province.”

Sixty years later the building of a hospital at Carleton Place was proposed and discussed at a Town Hall public meeting held in 1910. William Thoburn outlined the origin and growth of the Rosamond Memorial Hospital at Almonte.  Dr. Bruce Smith of Toronto, Inspector of Hospitals, attended and estimated the 1910 cost of a suitable building and equipment at $1,000 a bed, and the cost of annual maintenance in a town of the size of Carleton Place at $3,500 to $4,500 a year.  With local capital being invested in industrial expansion of value to the town, including a hydro electric plant and foundry and woolen mill enlargements, and with installation of an expensive municipal waterworks system in prospect, it was decided not to duplicate the facilities of available neighbouring hospitals. 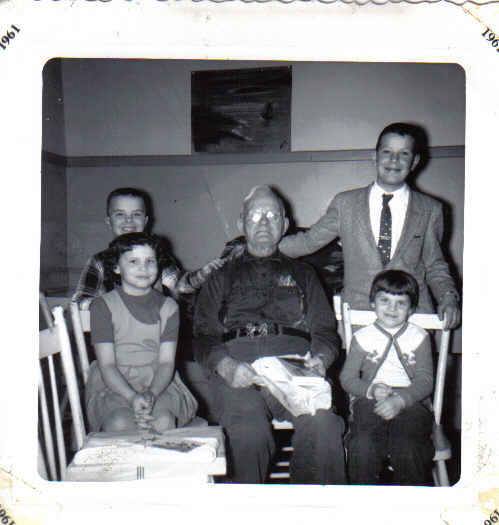 Debbie Roy added this: The photo below is of my Great Grandpa Gorr while he was a resident of this nursing home. (1961) Debbie, Grandpa, my sister Donna, my cousin Earl Devlin, and my Uncle Wayne.