Today I read an Ottawa Citizen article on the Lanark County Genealogical Society’s  Facebook page about the Canadian War Museum providing Major-General Sir Isaac Brock’s coat to help a Grade 8 student’s history project. This is a fantastic way to get our youth to study history, so why can’t Carleton Place’s very own war hero Roy Brown be in the Canadian War Museum too so some student can borrow one of his artifacts?

“We do not have anything on display,” said Avra Gibbs-Lamey media relations officer of the Canadian War Museum in a past newspaper article.

Now let me check some facts off: there are airports, schools and military bases named after him. We have a huge mural on Bridge Street in Carleton Place, yet no artifacts of his are displayed at the Canadian War Museum, and the staff remains mute about the whole subject. Heck, there was even a Hollywood movie made about the incident featuring Don Stroud as Roy Brown, yet Roy Brown’s name remains “an asterix” on the history books.

I am going to be honest and say I had no idea who the First World War pilot was until I moved to Carleton Place.  I write very little about him, as there seem to be endless articles and books, and very few outside the town’s limits understand the significance of what Roy did. But ask anyone who the Red Baron is, aka the German flying ace Manfred Von Richthofen, and everyone would have their hand in the air.

Brown  was the Royal Naval Air Service pilot from Carleton Place, Ontario credited with the victory that resulted in the death of the Red Baron. The Red Baron shot down 80 Allied planes, but the fact that Roy Brown shot him down is disputed all over the world. There was an American witness, but Australia claims it was machine-gun fire from their infantry on the ground that brought Manfred Von Richthofen down. Even in Carleton Place, his hometown, the controversy still hangs in the air. 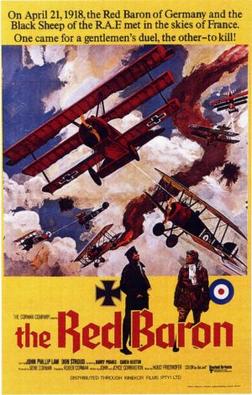 At the Royal Canadian Military Institute  in Toronto lies a piece of the triplane’s wing, the actual seat the Red Baron sat in, and a cut out of the plane’s actual iron cross — signed by Brown’s flight crew on display. Roy Brown himself donated it in 1920. So why can’t people come to a conclusion?

As Rob Probert, president of the Roy Brown Society in Carleton Place said,

“As far as we are concerned, it was Roy Brown who shot Von Richthofen down, and it is him who is officially credited.”

So what he is saying is that the other claims are just that. Not proven. For some reason, Canada does not want to give Brown his proper due and he wasn’t even accepted into the Canadian Aviation Hall of Fame until this year. So, I asked Rob Probert last week what his thoughts were:

“Many of us are at a loss as to why the  WWI story of Roy Brown and the Downing of Von Richtoffen ( The Fred Baron) are not represented in some way at all in the National War Museum. While it is not necessarily the Canadian way to boast of military events, this was a very significant battle that did have an impact on the closing out of WWI. Von Richtoffen was very much a German national hero. His downing had a demoralizing effect on their prosecution of the war.

We hope that with some time, and education, we can convince the museum to show some meaningful interest.

While there has been some questioning of the battle, it is, and has been well documented and should be recognized. Brown was officially accredited with and received appropriate honours for this feat. Medical evidence of the day and a variety of credible eyewitnesses all supported the story of Brown being the pilot who downed VonRichtoffen.

One of the goals of the Roy Brown Society is to make sure this story is not lost in time and to promote the other 14 WWI pilots from the Carleton Place area. Many of whom were Aces themselves and had incredible stories and lives post war.

We have been successful this past few years in building a national prominence and in this past year especially there have been several speeches in Parliament recognizing Brown, a wide number of accomplishments in Carleton Place itself, a number oif national newspaper stories and at least 6 radio interviews including CFRB in Toronto. We are especially proud of instigating his successful induction into the Canadian Aviation Hall of Fame this past June. There are three significant events planned this June and July in the Toronto area to commemorate his achievements.

We recently had an American Lt. General of the Air Force visit with us and was shocked to understand how little was known of this man and the true story of the battle. More work to be done.” –Rob Probert Roy Brown Society in Carleton Place, Ontario.