In a September 1950 issue of the Almonte Gazette the townsfolk of Almonte were so furious the editor went to his typewriter to complain loudly.

It is understood that the Unemployment Insurance Commission has terminated the practice of sending an employee from the Carleton Place office to Almonte to deal with the claims of persons out of work in this town. We don’t know who is responsible for this decision but it works a distinct hardship on those who must figure out some way of getting to Carleton Place once every two weeks.

If it were an indication that unemployment conditions, here, were no longer serious it might be accepted as a reasonable step, but this is not the case according to our information. It is said that there are still some 141 local persons under part or full time compensation, and the idea of all of them trying to thumb their way to Carleton Place seems very unjust. Employers and employes in Almonte pay into the funds of the Unemployment Insurance Commission in the same way that is done by those liable in other towns where the Government set up branches. It seems outrageous that workers should be penalized because they live in a town close enough to a larger one that the Dominion Governm ent feels it can save money by making the one office do. Many of these claimants, practically all of whom arc textile workers, should blame the Dominion!

On top of that they are required to pay or beg for transportation to the nearest unemployment Insurance office. It sounds like something out of this world. Unless our information as to the number of local people affected is incorrect, the least that could be done is for the Commission to keep on sending an official over her to deal with.

Almonte cases rather than have 141 unemployed going seven miles to demand what is their right. If there were only a few out of work, here, as was the case in normal times, the arrangement we complain of would cause no particular hardship, although we can’t see where it is justified even if only a dozen claimants were on the roil. In the above we are not blaming Mr. Frank McDiarmid who is in charge of the Carleton Place office. No doubt the action taken is in accordance with a general policy laid down by Departmental officials at Ottawa. After all Almonte is not the only town located close to a larger one that might be affected by the factors mentioned above.

F. C McDiarmid was a Merchant at Men’s and Boy’s Outfitters on Bridge Street.

Hitchhiking— Hitchhiking apparently, irked local police officials, as well as the F.B.I. First, in the late 1950s, the F.B.I. began warning American motorists that hitchhikers might be criminals. 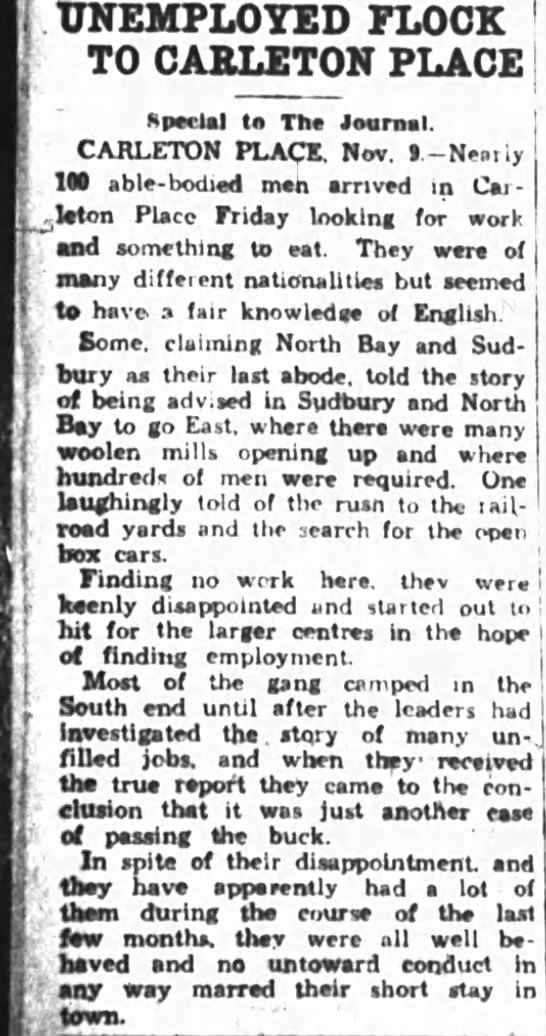