The telephone first came into public use in Carleton Place and nearby Ontario communities in 1885. The photo below shows the old telephone company building on Albert Street near the corner of Beckwith in Carleton Place that now houses Balance Within Yoga. The Bell building was (and still is) across the street from the old Zion United Church. It was built in 1927 and the interior was reported in the newspaper to be carefully finished. A glass partition separated the public space and the operating headquarters. Next to the switchboard there was an operator’s restroom and the chief operators desk along with a terminal rack at the rear. In the basement there was a new hot water furnace, coal storage space, a battery cupboard  and a workroom for the parts man.

If you lived in the country it was much different. To procure a phone you needed to pay 40 dollars for the phone wire and anything else needed. Each person who wanted a phone outside the town limits needed to supply three poles and labour to build the line. Outside calls to Carleton Place just outside the perimeter were then considered long distance. Marion Giles McNeely started working at the Bell Telephone Exchange in Carleton Place in 1957 and met some of the best friends I’ve ever met. Phone numbers were three digits and we also had to transfer long distance calls. 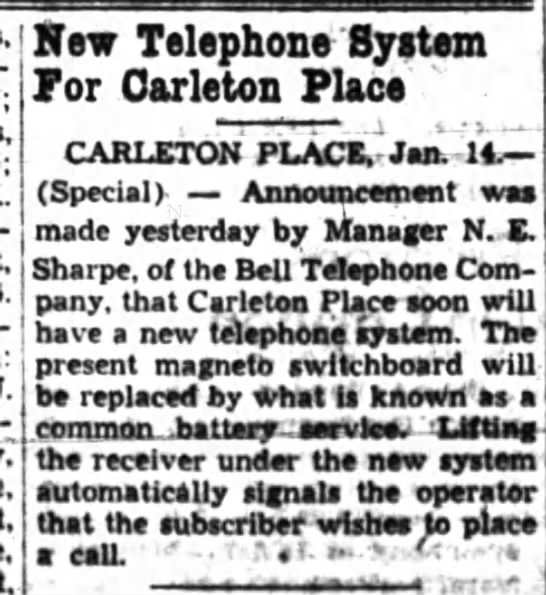 The new central switchboard they were installing in Carleton Place wasn’t going to be much different than the old one. But, it was necessary to have two boards to avoid interruption of service due to the changes in the new building. Back then calls could not be placed after 10 o’clock in the evening unless it was an emergency. After all, the women working at the telephone exchange also all had families to tend to. Imagine being an operator and having to remember numbers, as in those days you just told the operator who you wanted to talk too.

I remember as a child that it was common practice to listen in on the party lines when we went to visit my cousin.  It meant that many other households shared the use of the telephone line. If anyone was on the line, then we had to wait until they were finished. Of course if there was an emergency, you just asked the person talking to let you make a call. Sometimes there might be a disagreement about what determined an emergency. Everyone knew everyone’s business, and if someone was sick or having a baby it was all over the phone wires in less than an hour.

I actually miss the old days of the phone that required you to know or look up the number of anyone you wanted to call. And if you decided to leave town for the weekend, your phone calls didn’t follow you.

The above picture is CP’s Dr. McEwen who was featured in a Bell telephone ad!-Photo from the Carleton Place and Beckwith Heritage Museum

Photo Below- From Bonnie Tosh of Carleton Place