Everyone in Carleton Place knows this building on Bridge Street..

It used to look like this in the photo below — then, the building next to it  between the Mississippi Hotel (where the Hickson’s Fair sign is) disappeared. 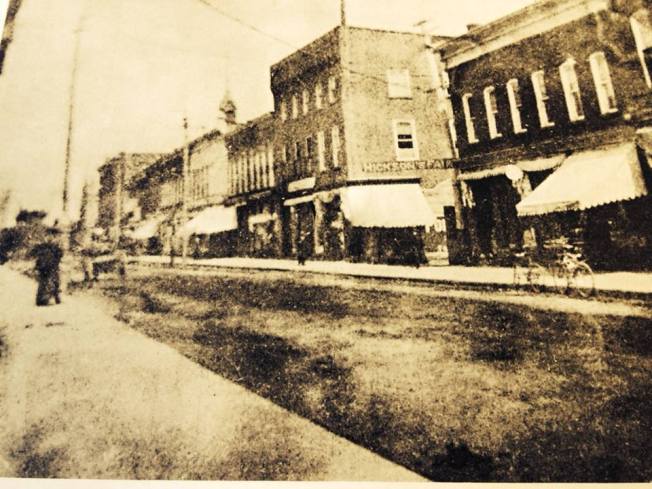 All photos from: The Carleton Place and Beckwith Heritage Museum

Now it looks like this with a missing building lot

So do you know what business was once where the H & R Block is?

In 1883 on Bridge Street, Hickson’s Fair was offering “cambric underskirts for 69 cents” and she was a dealer in fancy goods, notions, stamped linen goods, notions, Berlin Wools, souvenir goods,  white wear,children’s toys and the list went on.

She advertised her goods as well selected but the prices were low enough to captivate the public. The store was advertised as quite large and under the  entire supervision of Miss Hickson. She also had a branch store in Almonte. Sounds like you probably didn’t fool around with Miss Hickson.

This is not Miss Hickson’s store below– but this is probably what it looked like in the day.

Joey Bond was in that store when I was in school. Remember going there to get the gold & garnet ribbons we used to pin to our shoulder. She had an eclectic stock, sounds like what you listed for Miss Hickson, sort of. Things were piled all over. Beside her shop was Uncle Abe’s Barber Shop. He was a relative but have misplaced his last name in my memory.