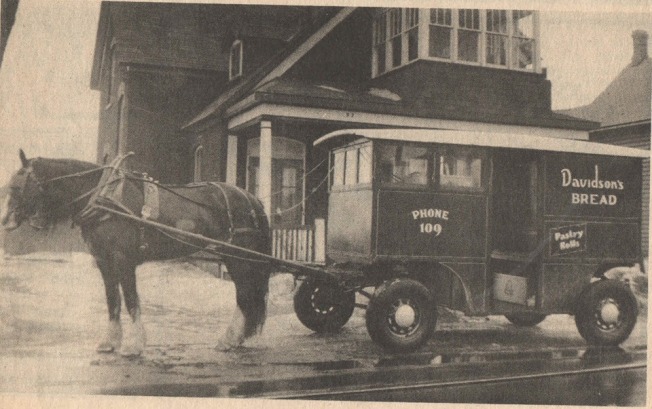 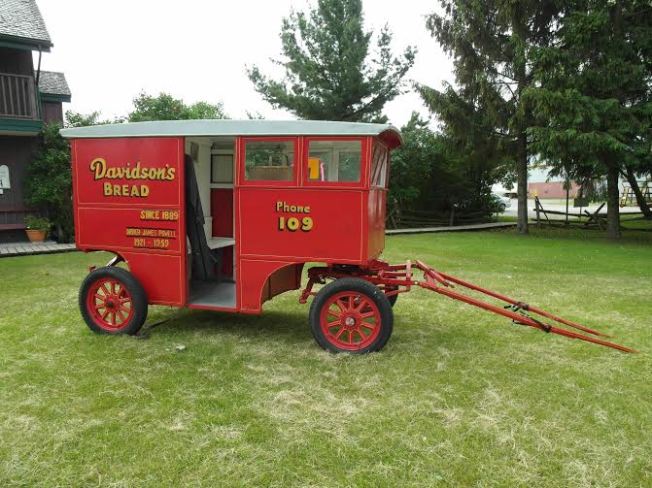 Photo-Jack Powell restored one of the Davidson bread trucks to a vibrant red colour.  I have attached a photograph of the truck to this email for your review.

HOMETOWN NEWS  has graciously published this story in their newspaper.

Remembering the Smells of Heaven on Earth —Davidson’s Bakery

What smells evoke the most positive emotions for you? For most of the world, according to numerous surveys, one smell stands out as the clear favorite – the scent of fresh baked bread. I am sure there are days some people still think they can smell the aroma of baked bread creeping around the corner of Russell Street in Smith’s Falls. There wasn’t a day in the past that a loaf of bread from Davidson’s Bakery would not some how become the biggest treat with just a little bit of butter and homemade jam.

For over three generations the Davidson family baked bread, and initially opened sometime in the 1870s. The original bakery spanned over three generations and H.A. Davidson opened the family business in what is now known as Davidson’s Courtyard in 1889. Once upon a time Davidson’s was the largest commercial bakery in eastern Ontario, and it was a place local residents could have a lifetime career.

Milton Davidson, in 1906, took over the business and kept on baking products like his father that weren’t mass-produced, or chemical-filled like today. Davidson’s Bakery had the most up to date and largest sanitary plant between Toronto and Montreal. In 1914 one of the latest ideas in bread-making was installed in the Smith’s Falls bakery. A novel invention called the moulding machine which actually shaped the loaves of bread became the talk of the town. The process of baking the bread now went from the mixer to the moulder, and the whole thing was done by machinery.

Photo from Archives Lanark
Not only did they have night and day shifts, but they also distributed their goods over a 50 mile area that went East, West, North and South of Smith’s Falls. Davidson’s pastry and puff pastry became popular, and banking on it’s popularity, the company installed the best equipment money could buy to make sure it was a continued success.

Maybe some still remember the bread wagons that delivered fresh bread six days a week around Smith’s Falls. One of their most beloved drivers was Mr. Johnson and he not only delivered bread, but there were tarts cookies and other bakery sweets. Then delivery trucks replaced the horse drawn carriages and a local Toledo man, whose father once worked for Davidson’s has actually restored one of the bread trucks. On occasion, it has been on display on the grounds of Heritage House Museum.

The smell of bread baking not only causes most people to experience positive emotions, but it also causes them to act, no matter what year they were born in. That’s why the ghosts of Davidson’s Bakery seem to have stuck around the building.

In 2008 Chaps Paranormal Society began an investigation in the bakery building and in one spot the palms of their hands felt like they were holding ice cubes. The paranormal researchers said it felt like a younger boy was searching for his older brother, and there was also an EVP captured of a young girl. Locals have also seen a figure in one of the courtyard windows of a man in a fisherman’s sweater who has also been seen wandering in the parking lot. Then there is a girl or a petite woman in a bonnet that has been spotted in one of the courtyard stores. After all, no matter what life or after life you are living in; it’s always better with cookies–or the memory of them.

Right now there’s no place in the area where you can get baked goods like the kind they used to make at Davidson’s Bakery. The heritage building at 7 Russell Street West is now known as Davidson’s Courtyard. In 2003 it was transformed into shops that offer a distinctive shopping experience, blending old and new. Stores in the renovated complex are: 7 West, The Loft Artisan Gifts, Dawn’s Closet, Yoga Studio and Apollo Computers.

Perhaps it’s the memory, and the association of the smell of bread baking that walks hand in hand with pleasant thoughts of our childhood. The Davidson’s Bakery will never be remembered just as a bakery where bread was made. It was a symbol where treasured memories of still warm goodies emerging from the ovens that came with an almost maternal, or paternal in this case, blessing. You can’t beat that!