In 1964 I began to get myself into financial trouble with a mail-order company called The Columbia Record Club. At 14, I had a huge passion for music, and all I had to do was tape a penny to a card I found in the back of a comic book. I happily picked out what I thought was 12 free music selections– after all, Columbia House had shipped 24 million records to other teenagers that year. Nothing could go wrong, could it?

I, similar to other kids in greater North America had failed to read the fine print. Along with other Beatle fans I never understood the “music appreciation club” wanting me and other music aficionados to purchase a certain number of monthly selections that were not even in our genre of music. Of course, had it not been for Columbia House I never would have had an appreciation for Barbra Streisand had I not listened to the records they shipped me without consent some months before.

As the months passed I found myself with a lot of unwanted music and a growing bill that my allowance could not cover. My father had warned me, as he too had been taken in by something called “The Book of the Month Club” and caught by something called “negative option billing”. 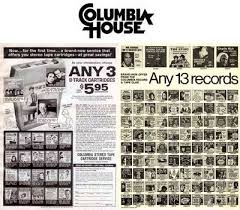 A man called Les Wunderman had taken “The Book of the Month Club” to new heights and created such novel marketing ideas as: the database, the 1-800 number, the ‘buy 12 items for a penny’ and postpaid insert cards.  Many teenagers had no idea about all of this, as all we knew was that we could order records for free without the cost of even a stamp.

There was nothing like receiving something free in the mail, even if they were hounding you for the $25 you didn’t have. The collection agencies began to send the obligatory nasty letters for the outstanding records I owed. I began to respond to the letters and argued they charged full list price for the records plus a very large “postage and handling” charge, usually $2.98 per record.  A $4.98 LP that you could get for $2.79 in most record stores would cost $7.96 with the club.

Columbia House kept sending the records and bills until one day I decided to ask for the help from the smartest kid in the 9th grade, Alan Barker. Word on the street was that he was some “boy genius” and was filled with all sorts of facts.

It took me days to gather up the courage to set up “an appointment” during school lunch break, and finally one day I took the plunge. As I told him of my dilemma he lowered his glasses and read the letters carefully and said he might have an answer the next day.  Forty-eight hours later he summoned me to his desk. By that time others had gathered, as it seemed they were ‘under the boardwalk’ with Columbia Record House too. The young man with the razor sharp haircut was tapping his fingers on his desk and began to smile broadly and said,

“Linda, I have an answer to your problem and it’s quite simple!”

Gasps could be heard around the room that we had someone so smart in our school that could save us all. He held up the collection letter and began to laugh,

“Just tell them that contracts like this are not legal tender for anyone that is fourteen!”

With that everyone clapped their hands, and that very night letters from all the corners of Cowansville, Quebec were sent to Columbia Record House. In later years some of us still found ourselves caught in the clutches of other “kissing cousins clubs” that sold CDs, video and cookbooks. But, it always made us remember that day when we learned that you could not force ‘little children’ to buy Ray Charles Singers records, but negative option billing would always be legal in some shape or form.