Two weeks ago thanks to Russ at Motorhouse Mitshubishi I got my winter tires on my car. As I listened to the roar of the heavier tires, and watched them throw my tire sensor system out of whack, I had to laugh at some old memories.

My late husband Angelo used to argue that winter tires were “for people from Toronto who have to call in the army to shovel the sidewalks when it snows.”  That was until one day he backed down  my father’s snowy Quebec driveway and removed part of his fence. Not content with believing his Delta 88 could do such a thing he attempted to reverse again, only this time he hit the mailbox. 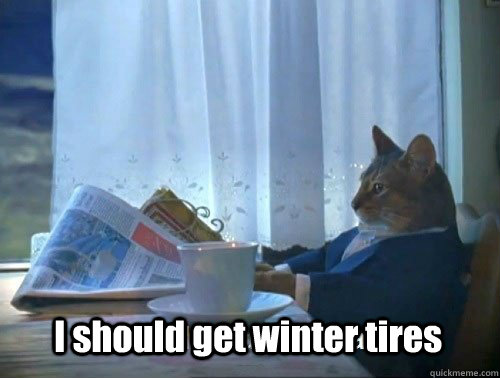 When I overheard Ange tell my oldest son Sky years ago to get his head out of his you-know-what and put some winter tires on his car I just smiled and kept my mouth shut.

My late father Arthur Knight always insisted that you keep bags of sand in the trunk for traction in case you got stuck in the winter. His 70s Ford Pinto was loaded to the brim with bags of salt, and when I went to visit him he insisted in tossing in more in my trunk.  It was supposed to add weight, and if I ever got stuck, the sand could be used for traction he said. I never actually got stuck, so I never had to use the sand. Somehow I doubt that a couple of sandbags add or subtract anything meaningful to the traction of a vehicle that already weighs a few tons when empty, plus a few hundred pounds with a driver and passenger.

Every year AAA (auto club) publishes advice for winter driving and putting sand or litter in the back of a rear wheel drive car is always on the list. I personally prefer cat litter because it’s relatively inexpensive (non clumping, non scented) and provides decent traction.

When I was a kid everyone had had snow tires.  It was only in the 80s that people got stupid and bought into the “all season” foolishness.

We’ve all heard someone say.

What are they really saying?

“I’m in total control of my ride at all times, and the rest of you morons can’t be bothered.”

I have yet to meet a driver who can command the elements, predict within inches where their vehicle will halt on black ice, and somehow prophesy the actions of other motorists. Like me, when I slid off Fallowfield Road years ago and sat in the ditch with a German Shepherd sitting shotgun for an hour. Now that’s another story!

Henry Code-Ah, but the sand for weight was significant in the days of rear wheel drive, because most of the weight was in the front. I can well remember in my youth,the only way I get up an icy hill (not having heeded my father’s advice about the sand) was to have a couple of my friends climb into the trunk to put some weight over the back wheels.

The Benefits of Having a Large Human Chassis for Traction