I have known Susan and Jeffrey Hudder from Appleton for decades. Jeff has been a friend of my son’s since elementary school, but I swear I never knew this story until I read it in the Carleton Place and Beckwith Heritage Museum newspaper archives yesterday. Mary Cook had originally written the article for the The Carleton Place Canadian, and when I read it I was flabbergasted.

It seems years ago Jeff’s grandfather Harold Cybulski from Barry’s Bay was operated on for an aneurysm in the aorta. The operation was deemed a success but the next day his blood pressure spiraled out of control and Cybulski was in a coma for the next 10 weeks. Two weeks later a team of specialists told the family that he would never leave the I.C. U. He was on life-support systems, but now he was considered “brain dead and comatose.” The doctors said it was time to disconnect the machines and let him go. Even if he did survive he would spend the rest of his life in a chronic care unit.

I know Susan Hudder of Appleton, and this woman never takes anything lying down. After they gave her father his last rites she decided her son Jeff had to see his Grandfather. Hudder took a chance and brought Jeff to the hospital to see his Poppa one last time. As she pushed the stroller through the doors of the hospital she knew she might be told to leave as no one was allowed in the I.C. U. under the age of 18. It had to be quite the decision to allow your son see his Grandfather lying in a coma, full of tubes.

Jeff on the other hand, didn’t care what his Grandfather looked like and when he saw him he just did what any normal kid would do. He looked at him and screamed, “Grandpa”. What happened next is something you only see in Hallmark movies. His Grandfather immediately sat up in bed and stretched his arms out to hug his grandson like the past few weeks had never happened.

It is fair to say that this miracle made everyone cry including the nurse Joanne Simpson. Her exact words were: “If anyone can make this child live, this little child will” and she promptly put him on the bed next to his grandfather.

“Poppa” went back home to Barry’s Bay a week later, and within days he was walking again. Six months later, he was leading a completely normal life, to include driving the new car he had been looking forward to buying before he became comatose.

Was it a miracle? Susan said she always believed it was because of all the prayers that came out of St. Hedwig’s Parish in Barry’s Bay. Just when you think modern medicine has all the answers you realize that sometimes it just doesn’t. In hind sight that would be like trying to count the stars. There is an unwritten law that the bond between family can never be broken, especially between a grandfather and his grandson. After all they hold each other’s hearts forever, just like Jeff and Poppa did.

Harold later died in 1991 and is buried in Barry’s Bay. May he rest in peace. I will never forget this story and now know that miracles really do happen. 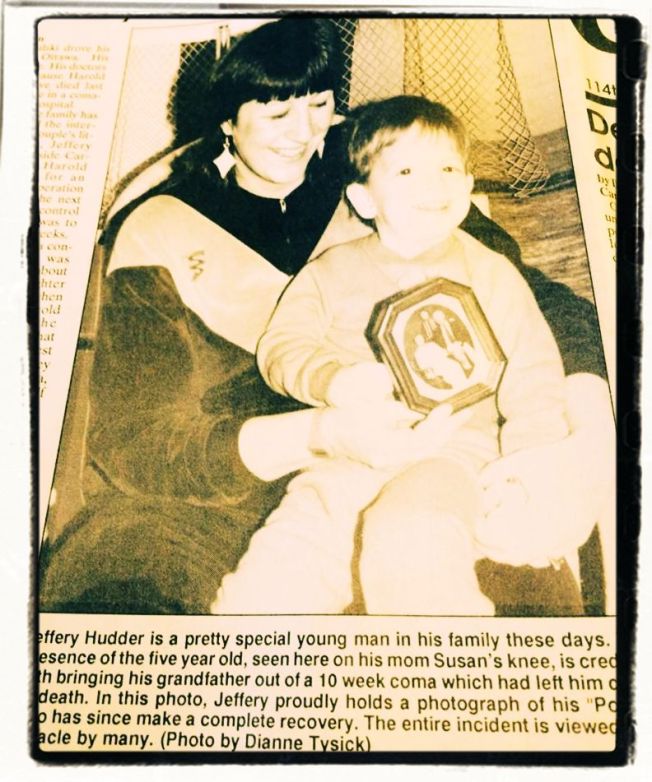