In 1915, a German submarine torpedoed and sank the RMS Lusitania; 128 Americans were among the 1,198 dead. The event outraged illustrator Winsor McCay, but the newspapers of his employer William Randolph Hearst downplayed the tragedy, as Hearst was opposed to the US joining World War I. McCay was required to illustrate anti-war and anti-British editorial cartoons for Hearst’s papers. In 1916, McCay rebelled against his employer’s stance and began to make the self-financed, patriotic Sinking of the Lusitania on his own time.

The bombing of a passenger boat was a crime that shocked the nation. The Carleton Place newspaper reported that Mr A. Elliot of Calgary as well as Mrs. Elliot were among those that were rescued. Mr. Elliot was the nephew of Reverend Canon Elliot of St. James Anglican Church in Carleton Place and had been married just the year before the tragedy. Elliot was an engineer in the west and was on his way home to go to the front. He had stopped off in Carleton Place en route to New York to see his uncle, Canon Elliot first. 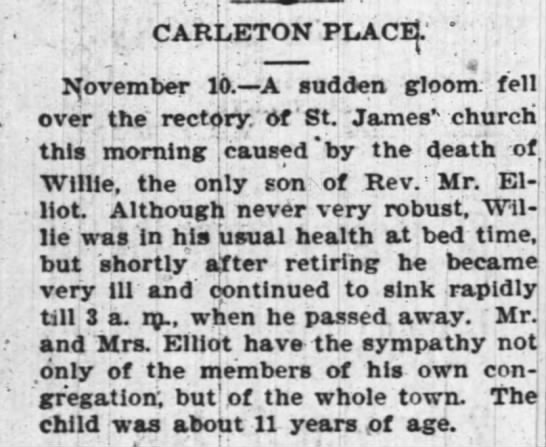