A long time ago boys hounded their fathers when they bought their tobacco. You see there was a picture of an actress enclosed in each package or can of Old Chum smoking tobacco. Sometimes if you got really lucky a young lad might be able to acquire a picture of a lady in street attire- or even better- a chorus girl!

Henry Schwerdtfeger parked his vehicle outside his Tobacco shop at 33 Bridge Street, (currently the As Good As New store) with his advertisement painted on the side. The’500′ sessions were held each week in the back room of Henry Schwerdtfeger’s store. Henry would greatly enjoy the grouching of some of his players whether it made no difference to him if they were winning or not. 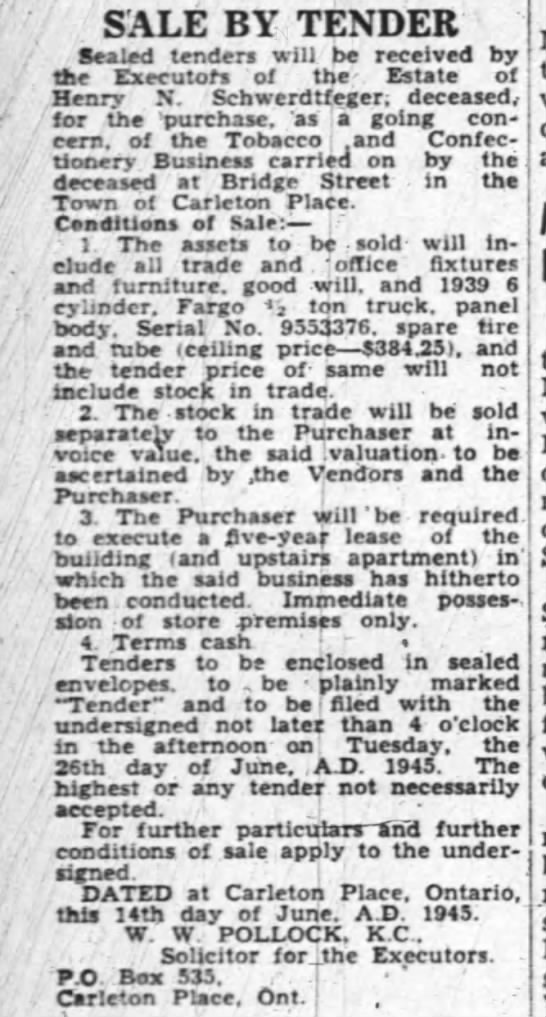 The Swerdfeger block on Bridge Street has been purchased by Mr. McCullough of Ottawa who is a photographer. Mr. McCullough will occupy the upstairs apartment and the smaller store as his office downstairs. He plans to rent the balance of the premises. Mr. Swerdfeger has spent most of his time in Burritt’s Rapids for the past two years where he operates a general store. His wife and daughter Marilyn will join him there. Mr. Swerdfeger purchased the property and business ten years ago from Mr. and Mrs. Allan Johnson. The new owner takes over on August 15th– August 1958