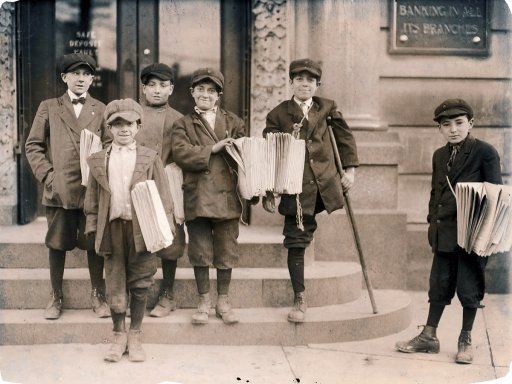 Last Tuesday a counterpart of some of the city magistrate’s trials was enacted here in the Council Chamber before the mayor and John Doran, Esq., J.P. at which little of the element largely prevailing in the moral character of the local newsboys was brought to light.

A young lad, a son of John Cathcart, was charged with stealing the sum of $20 from his father; the charge was made good; and besides that the evidence adduced that the young scamp had spent about $4 on sweets and drinkables of various kinds by which time he had become so drunk that he was forced to defer his cherished scheme of getting rid of the whole of it in the same manner until he could get sobered up again.

He was found in a ditch by parties in quest of him late in the evening.  He had broken into the chest containing the money while his father was absent.  He was only nine years of age.  After mature deliberation he was sentenced to one month’s imprisonment in the jail.

In the centre is Luther Gosney, 10, who was sent to prison for 21 days in 1876 for stealing two tin horns worth eight shillings.

After his release, Luther spent five years in a reformatory, schools for juvenile offenders aimed at correcting their behaviour.

Samuel James, 11 and on the right, was working in a silk factory with accomplice Albert Hallett, 10, when the pair were jailed for a month for stealing cocoa in 1873.

Also pictured is Pricilla Penfold, who was jailed for a month in 1874 and sent to the reformatory for five years for stealing a cloak.