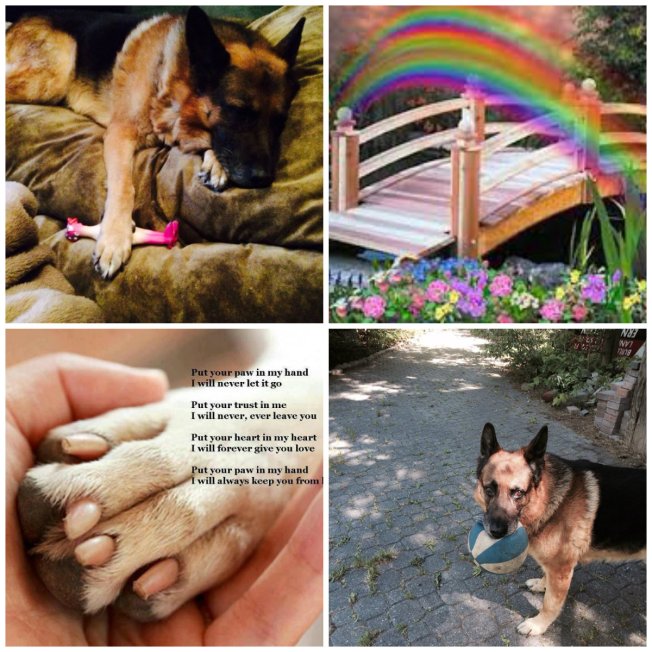 As the morning light eased through the windows I rolled over Axel’s squeaky toy I had gone to bed with. I trudged downstairs still talking to an invisible beloved pet and began to throw peanuts outside for my friends the squirrels. One of Axel’s greatest joys was his tiny furry pals that roamed the neighbourhood. He let them to know he was in charge of the yard and chased them a few times in the morning. Later he would lay by the door and allow them to run up and down the trees freely.

This morning something strange happened. Instead of hanging on the branches of the nearby trees two squirrels ran across Campbell Street when they heard me. Then another small black fellow came out from nowhere and scampered up the stairs to my feet. He looked at me intently and all three seemed to know Axel had passed on to the rainbow bridge. They had never come so close to me ever. So what did they know that I didn’t?

Not that we can ever admit it, but it seems pets make the transition over to the other side easier than we do. While I am having great difficulty accepting my beloved pet’s death it seems they just aren’t attached to their physical forms like us. While we fight to our last breath they have already prepared to joyfully move on to the next frontier.

Axel didn’t care what medication I gave him to take the pain away in his hips- he lived with it silently. My boy lived his life like all animals. There is no doubt in my mind animals were put on this earth to teach us about mercy, forgiveness and love. Axel knew just like the squirrels did today that no matter what end of life decision I made for him; he wanted me to release my guilt and move on. I honestly think those squirrels got a message from him to tell me that he knew I loved him and did the best I could.

Never underestimate what a pet can do – they leave us with a legacy and a reminder that the ultimate part of life is to enjoy it. Maybe someday we will understand the rainbow connection.

Some day we’ll find it
The rainbow connection
The lovers, the dreamers, and me

UPDATE.. THIS MORNING THE SQUIRRELS RESUMED BUSINESS AS USUAL. THERE IS NO DOUBT IN MY MIND THEY HAD A MESSAGE FOR ME YESTERDAY.