The Leland Hotel at 224 Bridge Street was built in 1830 for Robert Bell, and is one of the oldest stone buildings in Carleton Place.  Opened in 1846 by Napoleon Lavallee as the Carleton House Hotel and was operated by him until 1870.  During 1870, Napoleon Lavallee removed his hotel business to his large new stone building that he built at the corner of Lake Avenue and Bridge Streets known as The Mississippi Hotel. The Mississipi was later taken over by Wattie McIlquham who later built an addition to the building.

For thirty years thereafter the Carleton House Hotel was run by others including George Cornell, A Broom, A.J. Fulton and then bought in 1900 by Peter Salter and named the the Leland Hotel.

In 1904 it was renovated by Michael Doyle and operated by his son Leo after his father’s death. In 1955 it was converted into a business premises, and it should be noted that the building’s walls contained some of the town council meetings in the 1840s and 1850s.

The Revere Hotel was on the right hand side where Petals and Paint exists now. The reason I am showing this angle is because Doc McGregor first had his office between the Leland Hotel and the Revere House. This space was later walled up. If you look closely at the stonework there has been some work done. The mysteries of Carleton Place.

From the picture it looked like quite a grand hotel, but sadly it closed and remained vacant for years. The Drader family moved to Carleton Place around 1932 where Simeon worked as a carpenter. In 1953 he purchased the old Rathwell hotel which by then was in  very bad way and falling apart.

Drader renovated the building and constructed nine apartments in the building that was known as the Drader Block. In 1954 Simeon and Mary Drader celebrated their 50th wedding anniversary. The Rathwell Hotel was demolished in 1956 and Simeon Draper also died in 1956. 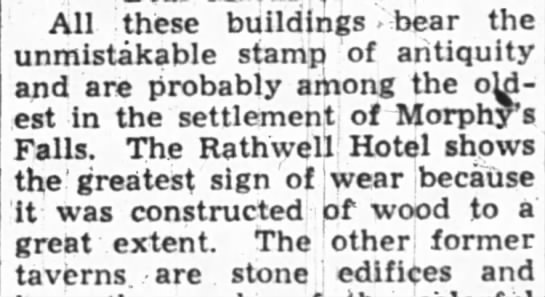 Of note: I read this morning in the newspaper archives that in April of 1915 three of Carleton Place’s hotels lost their licenses. Lee’s Hotel, the Central Hotel and J. E. Rathwell of the Royal Hotel. The Mississippi, the Queen’s and the Leland kept theirs and there was speculation of “who paid off who” at the announcement. Gossip never stops does it?