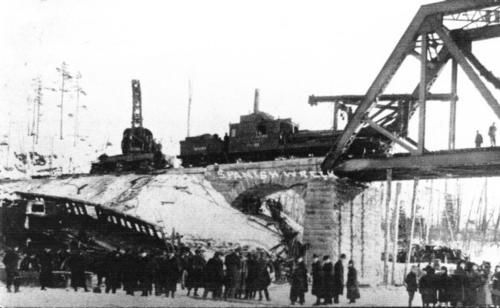 Sault Ste. Marie, Ont., Jan. 22 1910. — Dr. Allan McLellan,  former veterinary surgeon of Carleton Place was among those taken from the Spanish River a few days ago. He was a victim of the wreck of train no 7, and was the husband of a cousin of Mr. J.F Warren of the C. P. R. station agent in Carleton Place. His stricken wife also from Carleton Place is quite young, about 21 years of age. Dr. McLellan, who was in the first class coach, had arrived in Sudbury about a year before the tragedy with his young bride. He was married just a year on the day before the accident. This makes the third family in Carleton Place in which there is a relationship with families bereaved by the Soo Branch.

It is now believed between fourty-four persons were killed in yesterday’s wreck of train No. 7 on the Soo branch of the Canadian Pacific on the bridge crossing the Spanish river, thirty-eight miles from Sudbury, Ont. The train records show that when the train left Sudbury at noon there were approximately 100 persons aboard. Twenty-two injured were being cared for in Sudbury, and more in other nearby towns. Only a few escaped injury or death. 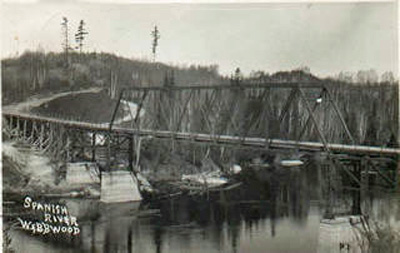 The exact number of dead would not be known for several days, as divers will had to thoroughly explore the Spanish River. Into the icy waters of which three of the seven cars of the ill-fated train plunged. In the burned wreckage of the four other cars were the remains of many others, making a complete list of the casualties almost impossible. The train was made up of a locomotive, mail and baggage car, express, second-class coach, colonist car, first-class coach, diner and Pullman.
The Spanish River bridge is an iron bridge and the heavy train struck it on the down grade while going at a high rate of speed. As the train was crossing the bridge the trucks of the second-class car jumped the track, presumably from a broken rail. The car was cut in two against the bridge abutments, so great was the momentum of the train. One-half of this car, with the colonists’ car, first-class coach and dining car, were hurled into the Spanish River, crashing through the ice and being swept half across the stream. The Pullman broke from the rest of the train and toppled down the bank on its side.

A more terrifying death than those who were thus trapped in the waters of the river could scarcely be imagined and was only matched by the fate that befell the helpless victims who were pinned in the wreckage of the cars that escaped the river, but which were attacked by flames almost immediately. Passengers in the submerged cars fought like mad men to escape. Many of them succeeded in breaking through the windows only to find themselves imprisoned by the ceiling of ice. Eight of those in the diner succeeded in escaping, but not one of those in the second-class coach (the half that went into the river), colonist and first-class coach escaped.The dining car was not immediately submerged, which fact enabled Conductor Reynolds and others of the train crew to pull eight of the imprisoned passengers from the windows and through a hole torn in the roof.