In 2011 the archdiocese of Ottawa, which has one official exorcist on hand,  reported seeing an average of four major exorcisms per year over the past five years. A Quebec Catholic priest said in 2010 that he has performed roughly a dozen exorcisms since he was ordained nearly five years ago.

Indeed, exorcisms have been carried out in Canada for generations — albeit quietly, and in relatively small numbers as compared to countries such as Italy, where the belief in demons is more widespread. In Canada the church has a handful of official exorcists, and additional priests whose role it is to investigate cases of alleged demonic activity as reported by the public. Of course we all remember the film The Exorcist. The day after the film debut all hell broke loose with local Catholic priests telling their congregation that the film would nauseate you and violate many of your religious sensibilities.

In March of 1903 a shocking affair occurred in Carleton Place at about 4 pm in the afternoon. Nelson McWilliams was stabbed in the right lung by his step-father Alden Mathers at the house of the latter on the north end of town. It seems the younger man who was *married to Ida Amanda Coleman also of Carleton Place was extremely worried about his mother. As he lived close to his stepfather had gone over to see his mother who was quite ill. He believed the evil had control of her and insisted she summon the good Baptist Reverend- Reverend Hagen to help her.

Mrs. Mathers and her son then had a quarrel in which her husband, who was between 70 and 75 years of age, obtained possession of a knife and inserted a dangerous wound in McWilliams chest. Drs. McIntosh and Muirhead were in attendance and did not express a favourable opinion as to the probability of the young mans recovery. Mathers, was immediately put in custody. No word, (no matter how hard I looked today) what the outcome of the two gentleman was, or if Mrs. Mather eventually went all Linda Blair in Carleton Place.  But, I did find in some genealogy records that  Nelson McWilliams did have a child with Ida Amanda Coleman before the incident, and Bertha Jane was barely 4 when this event took place. The Catholic church continues to recognize the possibility of diabolical intervention in lives, but insists the evil is primarily personal.

Carleton Place and Beckwith Heritage Museum Linda Seccaspina look what we found in a recently donated police constable’s book! Actual receipt for the police services for the matter–March 1903

McWilliams-Coleman—Married, on May 15, at the Baptist Manse, Almonte, by Rev. R. Hagen, Mr. Nelson McWilliams, to Miss Ida Amanda Coleman both of Carleton Place. 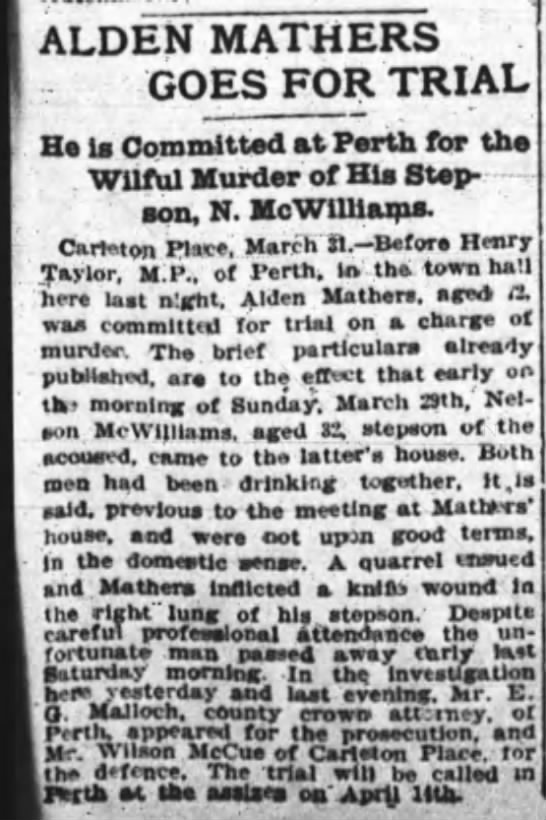 There was no other word what happened no matter how hard I searched.:)