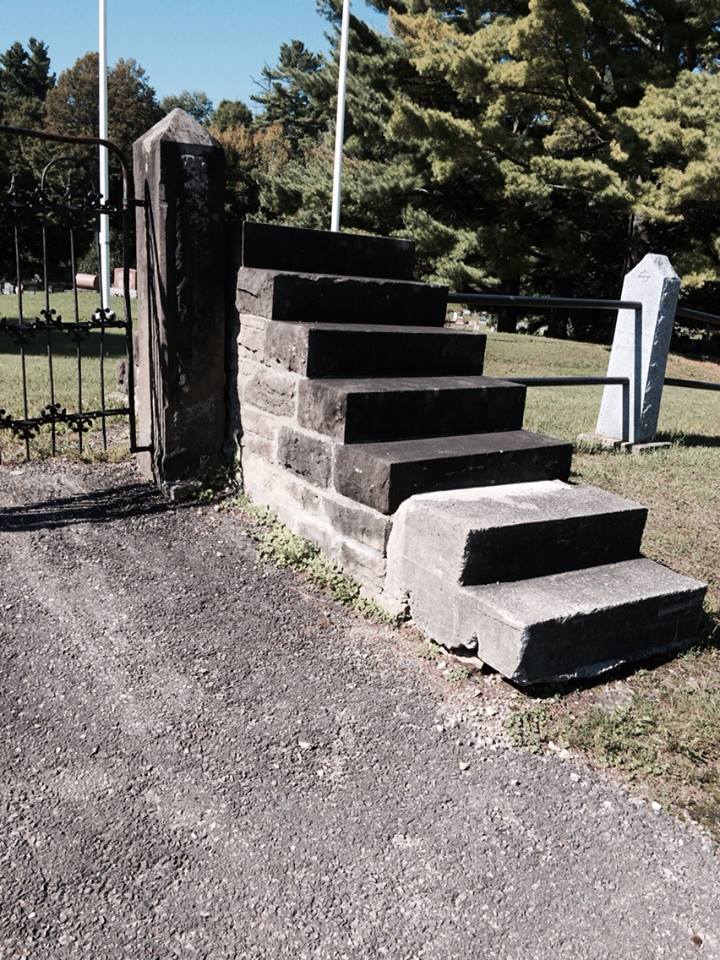 In some cemeteries there are outside stairs with 13 steps. These were also traditional stairs that went to the underground catacomb burial sites of the wealthy. In some cases they were supposed to reference the 13 Steps to Hell. When some descended the stairs they reported they saw a vision at the bottom. A small chair was sometimes placed at the bottom of the stairs, and once you sat on that chair, it meant you had sold your soul to the Devil. Some graveyard stairs have only 12 steps and the 13th one is said to appear at night. Personally, I would rather see Heaven than Hell– but how many steps are there leading into St. James Cemetery in Carleton Place? Thankfully, only 11. I made sure today– darn sure!

The St. James Cemetery can be entered on Industrial Road or on the Townline side by a gate, or a short flight of elevated concrete steps leading in when locked.  The cemetery dates back to circa 1834, the date of the founding of the Parish. Sometime between 1871 and 1890, George Dummert (more about him later), who had emigrated from England in 1871, was asked to draw up a plan of plots for the cemetery. Prior to then there wasn’t an official plan.

Grave robbery by the “Resurrectionist Men”, often doctors themselves, was a problem in the 19th century as medical schools (in Brockville and Kingston) needed fresh cadavers for dissection classes.  “Bricking-over” a grave was a way of guaranteeing some security after death. Having the elevated stairs like St. James might also be a deterrent for the grave robbers. I cannot imagine going up and down those stairs with a hoop skirt. No siree Bob!

There were so many superstitions about death, and burial you don’t know what to believe. Just remember one thing. The Irish settlers always prayed for rain when the burial funeral procession entered the cemetery. Rain was a good omen, as surely the departed would go to heaven-and the rain might slow down the body-snatchers.