In May I wrote a story about the Appleton Bridge collapsing in 1899. I swear I think about it each time I cross that bridge knowing full well it could never happen today. Abraham Lincoln Morphy was born in 1864 and married at age 23 to Rebbecca Conn. He had 6 children: Hugh Franklin Morphy, Norman A Morphy and 4 others. Abe was the son of Abraham Sr. Of Ramsay and a brakeman for the C.P.R. He passed away in 1899 at age 35, drowning in the Mississippi River below the Appleton Falls

In 1899 in the Almonte Gazette it was noted that the Appleton Bridge had been built in the year 1858 by Mr. Jerry Sullivan and his late brother of Appleton. The bridge was renewed in part once or twice. In 1898 the plank was relayed, and to all appearance was above board. But after the disaster of Abraham Morphy it revealed the bridge was nothing but a mass of decayed timbers.

From the Carleton Place Herald 1899:

The Funeral has been fixed for tomorrow afternoon, at 3 o’clock, to Cram’s cemetery. It will be attended by the members of the A.O.U.W and the Railway Trainmen. Both the horses were drowned, and the carriage is a wreck. They belonged to Mr. John Campbell, liveryman, of this town. During the afternoon a number of the C.P.R. trainmen went down to Appleton to aid in the search for the body. Mr. J.R. Hamilton, in a conversation with Miss Mattie Beckett, ascertained about the spot where Mr. Morphy was last seen by her with his hand raised as he went down for the last time. He with Frank Towsley, took a boat and went directly to the spot, grappling with the body at once on reaching it. One of the horses was seen floating through Almonte late in the afternoon yesterday. An Inquest had been demanded, and is in progress this afternoon as we go to press. The Coroner’s Jury Being a Verdict of Culpable Negligence….

On the 28th of November 1899  the lawsuit went to court. No mention of the outcome 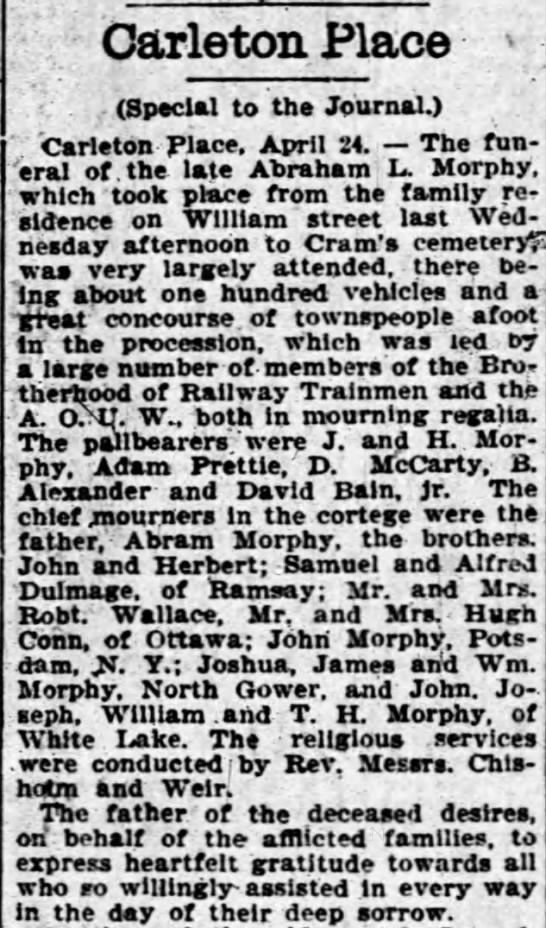