Warning: Not All History has good memories- could be upsetting to some.

I found three sentences in the Winnipeg Free Press about a husband who had a complete meltdown. You have to understand that even though ‘yellow journalism’ was prevalent in the past, if there was something that should be hidden for local eyes—it was swept under the rug pretty quickly. However, I did find the complete article in the Almonte newspaper archives on the very front page.

In March of 1925 Mrs. Selima LaVallee of Carleton Place was attacked by her husband Peter. Apparently family troubles had not been a new thing, but this time Peter LaVallee had decided to go all Lizzie Borden on his wife. A labourer in our fair town, now found himself under arrest as his wife lay in pain in the Almonte Hopsital recovering from axe wounds.

Mr. and Mrs. LaVallee, along with their four children, occupied a small log cabin on the 7th line of Beckwith. LaVallee had been cutting wood for Thomas Godfrey of Carleton Place when he suddenly headed home and attacked his wife with an axe. After the attack he began to suffer remorse. He walked to the next concession and telephoned Rev. F. E. Gray of Carleton Place to tell him about his wife’s injuries. Gray in turn contacted then Carleton Place mayor J. A. McEwen. The mayor contacted Police Chief Fred Nichols who immediately went to LaVallee’s cabin with Dr. Johnston in tow. After such a lengthy delay Dr. Johnston found Mrs. LaVallee in a very weak condition. She had deep gashes on the back of her neck, one finger was almost severed on her left hand, and her right hand was badly cut.

LaVallee was brought to the Carleton Place jail and told authorities he had no recollection of the axe attack. Mrs. LaVallee begged to differ and said her husband had attacked her during a disagreement and struck her repeatedly with an axe. Thankfully the four children were not at home and were immediately brought to the children’s shelter in Carleton Place when they arrived home.

In the opinions of others that knew him, LaVallee had experienced a moment of temporary insanity. Two years previous Peter had attempted suicide and police had been called on numerous occasions to their residence to restore order. One would immediately assume it was the pattern of an abusive husband. I know I did.

I decided to take it a few steps farther and found out they had lost an 8 year-old daughter named Eva in 1919. I think we all know that wielding an axe on your wife is just dead wrong. The man was definitely suffering from grief and deep depression from the death of his daughter if he had previously attempted suicide. Today the man would have been charged and would been given help with doses of anti depressants.  His wife Selima never left him and was buried next to him in the end. It was also noted in different archives that the other children were married off early in the coming years. 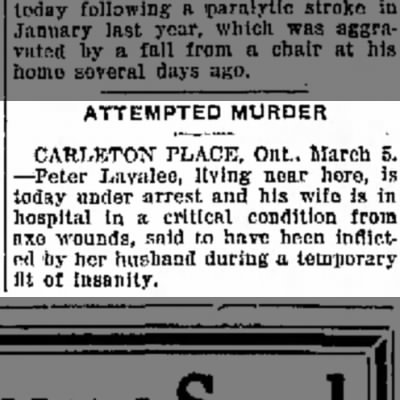