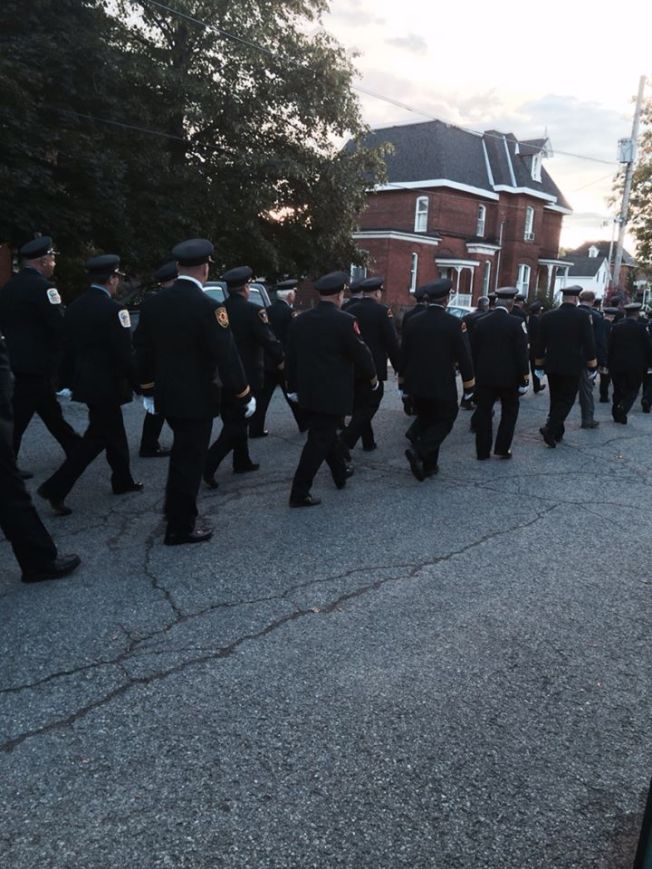 On Tuesday night I stood in front of Alan Barker’s funeral home watching our local area firemen in awe. Fire Dept. Representatives had all come to attend local Carleton Place resident and fireman Ab Hurdis’s wake. Standing on that step I almost broke out in tears. I personally feel I owe the Ocean Wave Fire Dept. a lot, and so does the rest of the town of Carleton Place. Who else would come running at a moments notice when something happens to us, or our homes, if we didn’t have them?

It was a cold January day in 1995, and the kids were flooding the rink outside when I noticed our German Shepherd, Snoopy racing in from the greenhouse with a huge plume of black smoke trailing him. If there is an emergency, I am not the one to send to an EMT unit as I panic easily. I screamed for someone to call 911, and we simply thought a hose spraying a steady stream of water into the basement window was enough to contain the fire.

Within five minutes the basement was engulfed with flames and I attempted to go into the greenhouse to save the birds and ferret. Smoke quickly turns into a blackness that cannot be measured on a colour chart, and within seconds I was trapped. An Ocean Wave fireman pulled me out of that room as I could no longer find my way out.

My sons and I were sent over to a neighbour’s home while we watched the firemen try to save our house. I wanted to cry but I couldn’t, and the kids kept asking me if everything was going to be alright. In my irrational mind I thought things would return to normal once the fire trucks were gone and life would go back to the way it was.

The fight for our home was not over for another 18 hours. The firemen left at about 5 pm overwhelmed with the intensity of the smoke and one ended up in the hospital. They had done their best and thought the fire had been put to rest, but my husband Angelo and his father sat guard all night watching for hot spots. Sure enough at 1 am a wall in the living room went up in flames. Had they not been there the house would have been a total loss.

The next day the kids and I returned to our home and I knew then and there that everything was not going to be alright. The living room hardwood floor was swollen with water and raised in many places. The charred Christmas tree and all its decorations stood against silent black walls. I stood there and realized there was a long road ahead of us, and my tears began. But my family was alive, and that was thanks to the Ocean Wave Fire Dept.

The Carleton Place firemen had given us a couple of boxes that were decorated like Christmas presents. They had not wanted the kids to be upset, so they had wrapped up the perished pets as gifts. Since it was in the dead of winter I could not bury them, so I made a tiny raft and sent them down the Mississippi river.

No matter what has been done to your home, once it has been touched by fire it will never be the same. It seems to lose the original soul in the belly of its interior, and because of the destruction many pieces of emotions are lost and will never come back. But loss of life is far worse than a building or an inner soul needing to be renovated.

Firefighters are some of the most selfless people you will ever encounter. These volunteers sometimes ignore the dangers even when no one is inside a burning building to be saved. Like Ted Hurdis said about the late Ab Hurdis: “Ab wasn’t very big, but if you ever saw him coming out of a burning house you would swear he was 7 feet tall”!

Firefighters are essential to the safety and security of our local communities. We owe it to these men, and this week we lost 40-year-old volunteer fireman Ab Hurdis. Like a home rises out of the ashes, sometimes so do firemen. Last night I saw my son’s childhood friend Troy Hurdis standing in that line of firemen in dress uniform. Troy is now also part of the Carleton Place Ocean Wave Fire Dept. I know Ab and all the generation of Hurdis’s that were in the fire dept. were looking down on Troy and smiling– I know I was. We are truly blessed to have the Ocean Wave Fire Dept.