Bell Street an even century ago had some twenty five buildings scattered along its present four blocks.  William Street already had a similar number.  The section from Bell Street north to the Town Line Road, as the first subdivision of the future town, had most of its streets laid out as at present, but north of William Street they held in all only five or six houses.

The block of Bell Street next to Bridge Street was the second early business section of the town.  The first business there had been started about thirty-five years before this time by Robert Bell, together with his elder brother John and assisted for some years by his younger brother James, sons of the Rev. William Bell of Perth.

The new Sumner Arcade on its Bridge Street corner was built on the site of the original 1829 store of Robert Bell, in which the post office once had been located for many years.  The Sumner store was adjoined by several frame shops, William Moore’s tavern, later run by Absolem McCaffery, John McEwen’s hand weaving establishment, Mrs. James Morphy’s home, and near James Street, the late “King James” Morphy’s shoemaking shop.

On the south side of this Bell Street block were several shops with living quarters, including buildings owned by Mrs. Morphy and William Muirhead.  Down by the river side was an old tannery, once owned and possibly built by Robert Bell.  It had been owned for some years by William Morphy junior and was bought in 1861 by Brice McNeely, who built the present stone building there where he continued a leather tanning business for forty years or more.  At the other end of the block rose the venerable Hurd’s Hall, a relatively large two storey frame building then newly built, with its upper floor serving as the first public concert and meeting hall of the village other than the churches.  It was built by the young Dr. William Hurd, son-in-law of James Rosamond.  He had his medical offices there and lived in the former James Rosamond stone residence still standing on the corner across the street.

Going east on Bell Street, the second block from Bridge Street was occupied by the homes of Dr. Hurd and William Muirhead and, on the river near the present electric power plant site, by the sawmill owned by William Muirhead and leased then by Robert Gray.  The third block, between Edmond and Baines Streets, had the large frame Church of England on its north side, and on the south side Robert Gray’s house and a building near the river owned by William Muirhead and apparently occupied in connection with the sawmill.  On Bell Street’s last block, the north side had the home of Absolem McCaffrey, grocer and liquor dealer, the Wilson stone house then occupied by its builder, Dr. William Wilson, and a rented house owned by Robert Bell.  On the river side of Bell Street here there were two rented houses and the home and wagon shop of George McPherson, bailiff and carriage maker.

by our beloved Howard Morton Brown

Canada Lumber Co- 1902 –located at the park by the corner of Edmond and Bell Street. The closed Carleton Place sawmills and upper Mississippi reserve dams of the Canada Lumber Company were bought by H. Brown & Sons for water conservation and power development uses.Photo-Carleton Place and Beckwith Heritage Museum

Absolom McCaffrey was 46 when he opened his new bakery on Bell Street in 1867. Previous to this he had been a cooper – a maker of barrels – in business with Napoleon Lavallee between 1833 and 1847. Together they did a thriving business constructing butter tubs and barrels for flour and pork. Absalom was still listed as a cooper in the 1861 census. Why the change of career we wonder?–Carleton Place and Beckwith Heritage Museum 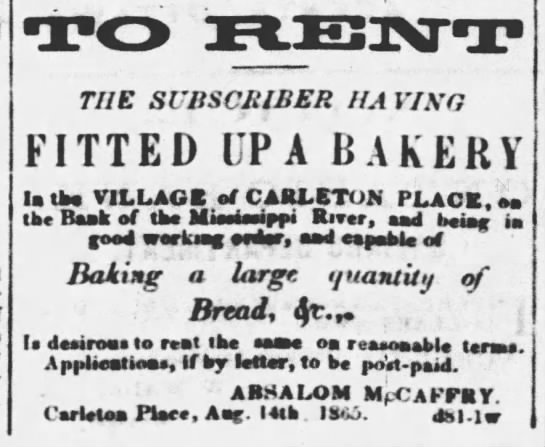 The Most Photographed Home in Carleton Place- Bell Street

Down by The Mississippi River with The Jessops

The Leland and Rathwell Hotels on Bridge Street