There is an ad this week on an online local classified ad site that states:

Wanted: Hippie family in need of a new place to live

The Children of God, now known as The Family International was one of the vilest of all cults and certainly the worst of the Christian cults. The Founder, David Berg, also known as “Moses David” or “Dad” and later “Grandpa”, combined hard core fundamentalist Christianity, with liberal sexual ethics along with his own, sick, sexual fantasies. 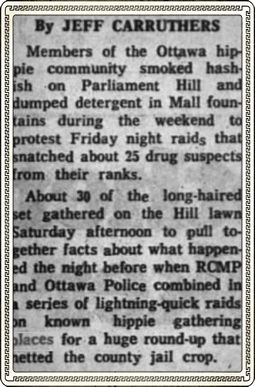 As Berg’s followers grew, Berg dubbed them the “Children of God” in 1968. The name was changed to “Family of Love” in 1978 and later to its present “Family International,” often called “The Family” or TF. It has adherents in many countries, often living in communes that were originally called “colonies” but are now called “homes.”

Berg taught that Christians must follow the Bible but asserted he was the Christian prophet for this era. His writings, called “Mo Letters,” informed his followers of new divine revelations. When he died in 1994, his widow, Karen Zerby, succeeded him as leader and remains so to this day.

In 1970 they showed up en masse on the steps of the Carleton Place High School. They were asked to leave many times and the police were quickly called. Before they left, they managed to hand out a number of pamphlets about the end of the world as we know it along with a request for financial support. The sect had received a lot of unsavoury publicity in Toronto– so Carleton Place was having none of it. The fact remains that if I am still typing this essay today the world did not end but —The Children of God never came back to Carleton Place.