In 1937 an electrical storm worthy of Dorothy’s tornadoes roared into town in the early afternoon of August 20th. High winds literally ripped off the steel roof of the Queen’s hotel in Carleton Place. The roof just didn’t fly into the air quietly. It firmly deposited itself in front of the hotel on Bridge Street. Blinding lightening were followed by high winds and torrential rain

Luckily only four cars had close calls from being partially crushed by the heavy metal that flew threw the air. The cars of Miss Florence MacIntyre and Mr. William Rathwell suddenly found parts of the Queen’s Hotel roof on top of their cars, but only sustained light damage. A portion of the roof fell on top of the car of Mr. Lloyd McGregor of Kirkland Lake who was just passing through town at the time. His car escaped with little damage.

On Rear Street five large trees were uprooted and fell completely blocking the street. There were many broken windows through town and when a tree blew down in front of Mrs. Robert Legerwood’s car she backed away from it only to have another tree fall in back of her. Mr. William Saunders of the same street had his car completely buried by falling trees and debris.

The Queen’s Hotel estimated the loss was about $8000 with the damage of the roof and the heavy rain which seeped through the rooms of the three-storey building. The storm put the complete electric service of the town out of commission for about three hours and some of the town was out until the next day. Owing to the shut-off in electric power The Carleton Place Canadian was not able to go to press until 9 o’clock that evening on the day of the storm. 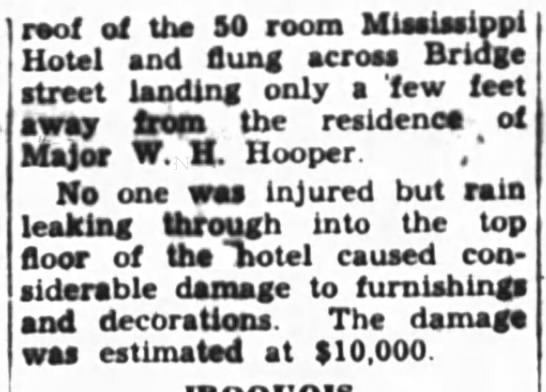 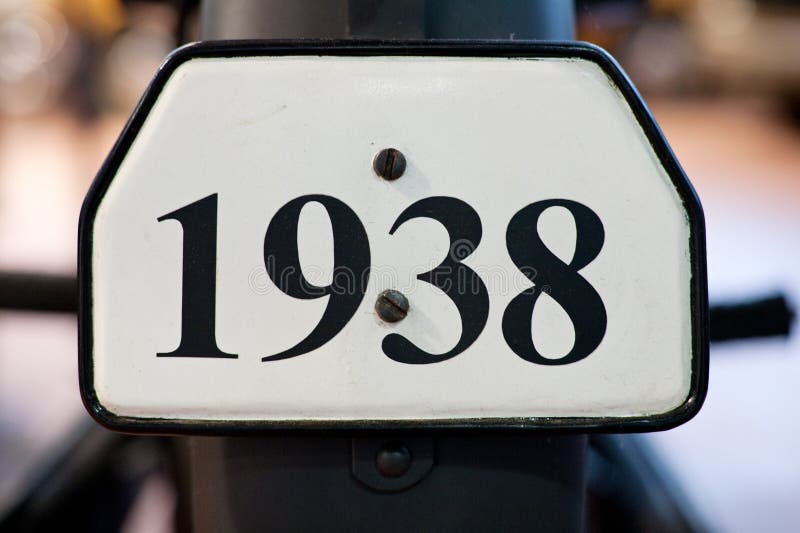 Perhaps the most violent and certainly the most destructive hail, wind and rainstorm ever to pass over this section, wrought heavy damage this afternoon. At 4.15, the storm broke and for ten minutes there was a steady downpour of hail and rain, some of the hailstones being larger than walnuts. For another ten or 15 minutes after the hall ceased a deluge of rain continued to fall. The storm was confined to the section between the second and  eighth concessions of Ramsay and petered out a mile east of Carleton Place.

In this territory a vast amount of damage was done, grain and corn crops being cut down and laid flat on the ground and what appeared early today as a record crop is almost a total loss.  In Carleton Place, a large electric transformer was burned out and many wires were blown down, causing a shutdown of power for a couple of hours, for almost half the town. In the path of the storm many windows were smashed but the greatest damage in this connection was in Carleton Place. At the High School, 127 windows were smashed, by hail, while in the Hawthorn mill, Godwin’s photographic studio and Morris’ greenhouse almost every pane of glass exposed to the west was destroyed.

The damage in broken windows in the country was also very heavy. About a mile east of the town the high wind carried off the roof of one of the barns on the farm of W. E. McNeely on the eleventh line of Beckwith and distributed it over the fields for a distance of over 200 yards. All the wooden fences on this farm were also laid low by the force of the wind. In the farm homes of Samuel and William Burns on the western edge of the town, over 40 windows were broken. So heavy was the rainfall that a section of Bridge street was flooded for a time with water four and five inches deep on the pavements, only the brief duration of the storm saving a number of stores being flooded. Just about a year ago a similar freakish storm tore the roof off the Queen’s Hotel and dropped It on Bridge street, completely burying a number ofcars parked in the area.