Today is Canada Day and I refuse to write about hockey, moose, the RCMP or snow. So instead I dug up this essay that I wrote in the summer of 2007 because I am proud to be Canadian.

It was the year of the Tim Horton’s “Lemon Drop” doughnut and I was rejoicing Canada Day with a few of my luscious yeast “lovers”.  For all my American friends, Tim Horton’s is an institution in Canada and on any weekday morning, no less than 30 people stand in line waiting for the products of Tim Horton’s to brighten their day.

Some political higher ups have complained about the rise of Tim Horton’s as a national symbol. Rudyard Griffiths, director of The Dominion Institute, wrote in the Toronto Star that the ascension of the chain to the status of cultural icon was a “worrying sign” for Canadian nationalism, adding:

“Surely Canada can come up with a better moniker than the Timbit Nation.”

So why does Timmy Horton’s do well in Canada I keep asking myself?  Accusations run amuck that people are willing to stand for hours and purchase Tim Horton’s coffee because there is some sort of additive in it that keeps bringing them back.

Shocking allegations of MSG or nicotine added to the coffee run rampant. It got so bad that CBC- TV did an entire program on the issue and in the end could not find a shred of proof. To be extremely honest; the coffee drinking crowd from Tim Horton’s is no better than crack addicts and they would be the first to proudly admit it.

After all “Tims” is a place “where everyone knows your name.”

No matter if a Burger King conglomerate in Brazil now owns Tim Horton’s, it still remains Canada’s national treasure. There is nothing like Canadian fellowship by sharing tables with strangers, and the thrill of watching someone order their first “double double”. 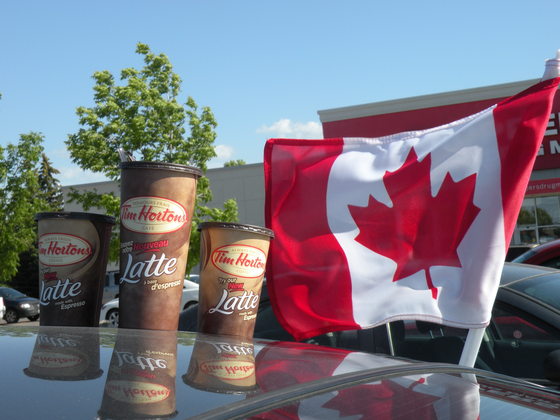