I have to truthfully say my metric knowledge is still non-existent. This old gal refuses to leave the world of quarts, yards, and Fahrenheit due to stubbornness. In doing some reading today I forgot that in 1983 Peterborough MP Bill Domm led the parliamentary fight against metric and brought it to the Carleton Place area. He said the country was throwing away money on silly costly promotion schemes such as hiring cooking experts for a cross-country tour to demonstrate the delights of metric cuisine. So the Conservatives put their money where their mouth was and set up a flourishing Freedom to Measure service station near Carleton Place on Highway 7. It was said that motorists were driving out of their way to gas up on imperial gallons instead of price.  The MP’s couldn’t wait to be taken to court on the issue, but in the last article I could find the Liberal government never charged them.

“Metric,” said Bill Domm, ‘is dead and preparing to lie down.”

Wonder how that worked out for him. Metric is still not working for me.:) 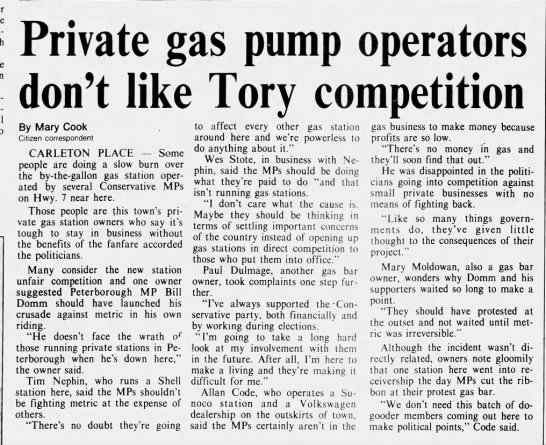