Last night telegraphic news came to our fair town of Carleton Place that Daniel E. Sheppard  B.A. that left some years ago to practice law at Gananoque has been bitten by a kissing bug. Mr. Sheppard was an assistant to the principal of Carleton Place High School, for a short period of time; a position which he filled with great ability. After a tenure of success he returned to his profession as a barrister, with an office in the old Bell Block. His friends sincerely trust that he may recover, and long retain the use of both of his eyes. One is reported to be in jeopardy from the sting of this venomous insect. 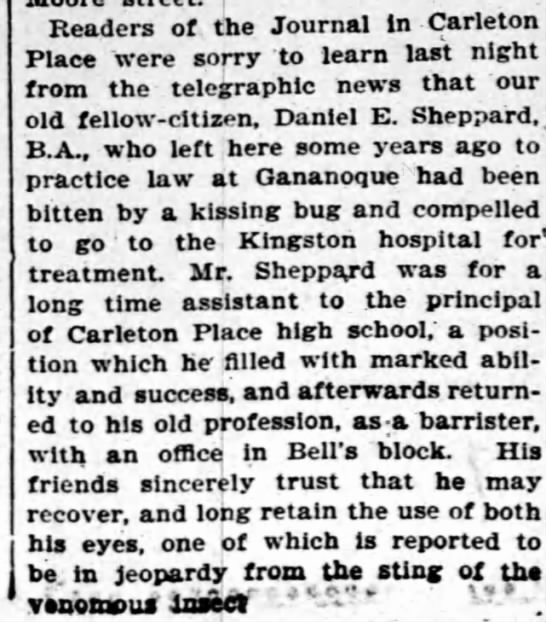 I thought this was an interesting article and I kept digging for a gravestone marker and I couldn’t find one. I think I should have stopped there, because what I found took my breath away. It seems that Daniel turned to drink or depression after he lost vision in one eye and committed some sort of crime. Because he was a barrister, and his brother was the mayor of Gananoque, he was allowed to stay at home until his trial. Unfortunately, Daniel could not deal with his life anymore. Because he committed suicide he is probably buried in an unmarked grave. Suicide in those days was considered a great act of despair. You never know what you are going to dig up when you do research, and this one is in my top ten list of tragedies and shock.

Carbolic acid poisoning
Victorians linked cleanliness to ideas of morality and respectability – the idea that it was next to Godliness was deeply ingrained. The new science of microbes only intensified the Victorian preoccupation with tackling germs, which they now knew could lurk out of sight. Chemical cleaning products to eradicate dirt and disease were heavily advertised and highly effective, but their toxic ingredients, like carbolic acid, were contained in bottles and packages that were indistinguishable from other household products. Boxes of caustic soda and baking powder could easily be mistaken. In September 1888, the Aberdeen Evening Express reported that 13 people had been poisoned by carbolic acid in one incident – five died. Only in 1902 did the Pharmacy Act make it illegal for bottles of dangerous chemicals to be similar in shape to ordinary liquids.

His brother must have known someone at The Winnipeg Tribune. This was in 1906. He obviously quit or did not run again after his brother’s scandal.