It seems in the old days people used to jump from trains a lot in this area, and many a mishap happened. I have read at least a dozen accounts today of people having terrible accidents. The man of the hour that seem to come to the rescue all the time was our very own Dr. Preston of Bridge Street. 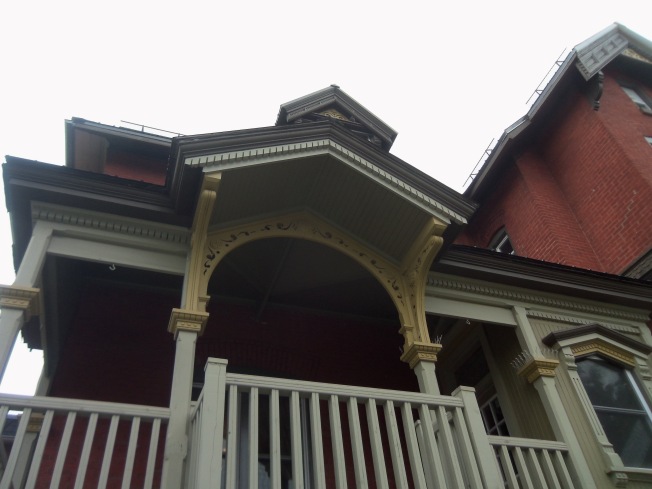 Newton Switzer of Ashton exhibited a remarkable piece of fortitude after getting his right foot caught off by a passing train in April of 1899. Switzer was on the No. 7 train at 3 am on the way to Carleton Place. After passing the railway bridge the train slowed up so the young fellow decided to jump off a platform of the slowly moving train at Anable’s Crossing. He missed his footing and fell under the train.

When he realized he could not stand up, he mechanically picked up his severed member, put it under his arm, and dragged himself to Samuel Dunfield’s house. Another week, another train mishap, and Dr. Preston from Carleton Place was the one that was always called. Throughout the whole ordeal it was said the brave young man never lost consciousness. Dr. Preston said he exhibited remarkable pluck.

Dr. Preston’s office was located at 104 Bridge Street.
The property was originally owned by Edmund Morphy. Later owners include James McDiarmid, Allan McDonald, John McEwen, Archibald Gillies and Alexander Forbes Stewart. Stewart sold the property to Dr. Richard F. Preston in 1883 for $1,000. This site was listed as “vacant” in town assessment roles of 1885 – 1889. From 1890 – 1897 it was listed as “unfinished”. The home originally had a stable behind it, kept by a Mr. Halpenny who drove the buggy for the doctor.– Carleton Place and Beckwith Heritage Museum
Top Photo- The Carleton Place and Beckwith Heritage Museum
Other Photos-Linda Seccaspina