In August of 1964, three young girls were caught on the Mississippi River narrow railway bridge. Watching in horror, a CPR Ottawa-bound Canadian passenger train was coming towards them quickly. Two sisters were forced to jump from the 25 foot high train-only bridge and they landed in the shallow waters of the rock-bottomed Mississippi River.

Deborah Dixon, age 10, received a broken leg when she fell into the summer level one-foot water. Her sister Karen, age 7, had only minor injuries as she landed in deeper water. Their friend Maureen Robertson had plenty of time to escape the oncoming train, but the other two girls panicked and jumped. Had it been Spring with the turbulent waters, their fate might have been different.

The train was only delayed 15 minutes as the passengers and crew ran to the river’s edge and rescued the two girls out of the water. As I took pictures of the bridge today I can’t even imagine the panic these young girls felt.

Today I heard from Debbie  Dixon who was one of the little girls in the story. I found the story in the newspaper archives but as with all media.. there were incorrect facts.. Now you will know the rest of the story… Thank you Debbie!!

Hello Linda,
My cousin found your article about the train accident. I am/was Debbie Dixon. My married name is Barrie and I go by Deborah Elaine Barrie now. I am a writer and an activist who helped bring in a ban or phase-out on cca treated wood in over thirty countries.
I was very surprised to learn of your article. While some of the details are certainly correct, I did not break my leg but I had several injuries some of which I have never recovered from. I had a concussion and a fractured skull and two chips knocked from my spine. I also had two broken bones in my right arm and a brachial plexus injury in my right arm/shoulder which cost me most of the use of the upperarm and all of the use of my forearm and hand. It never grew after that date and my cousin who found this article named it Tiny to which my family still fondly refers to it. The injury to the arm went on to save my life but that is another story being written about in my biography. 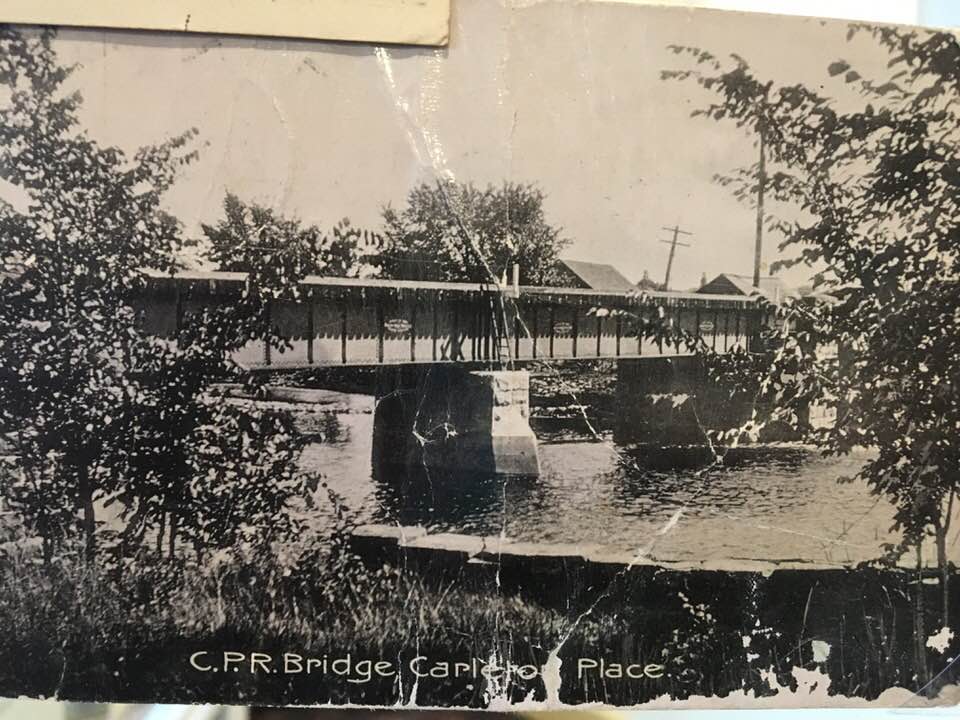 Photo Carleton Place and Beckwith Heritage Museum
My sister, Karen, did only receive a scratch and a bruise. Karen had her shoe caught in the tracks that day. I was ahead of her and Maureen was ahead of me. When the train came I went back and freed Karen’s foot and pushed her off the bridge. I froze and did not jump. Maureen happily did escape uninjured. I still remember her screams as she ran and jumped to safety.
I am married to a retired CP railroad engineer but he was not one when we married. What do you think Freud would say about that? The story of the train accident has been written many times including a piece in the National Enquirer but I have never seen it written with the facts straight yet. The Enquirer wrote it with my arm going to recover. I am not sure where your research came from but likely from one or more of the incorrect articles so I thought you might like to hear from me.
Thanks for taking an interest in our story. Of course there is much more to the story including why we were there. Karen and I had never been there before.
Take care and please keep safe.
Deborah

GIRL PLUNGES OFF BRIDGE TO RIVER TO ESCAPE TRAIN
Mies Annin Pretty in Thrilling Episode at Carleton Place.
Saved From Icy Stream By Allan Swayne.
SISTER RUNS TO SAFETY IN FRONT OF LOCOMOTIVE
Same Train Few Seconds Later Strikes James Angus, Retired Station Agent S
CARLETON PLACE. Feb. 7. Two Sisters. Annie and Ethel Pretty, miraculously escaped being run down by a C.P.R. passenger train, while crossing the railway bridge over the Mississippi river, here this evening. The former, jumping from the bridge, was saved from drowning only through the prompt action of Allan Swayne, who, noticing her danger, plunged into the icy waters and assisted her to shore.
It was the Pembroke-Ottawa local, due to arrive in the Capital at 6.15 o’clock, that nearly ran down the two girls, and a few minutes later struck James Angus, aged 70 years, retired station agent at Merrickville, just as it was pulling into the Carleton Place station. Mr. Angus fortunately escaped serious injury. He was conveyed to the Civic Hospital at Ottawa.
Barely Escaped
Annie Pretty, aged about 13 years, and ElheI. aged 12, walking the railway tracks, were about the center of the bridge spanning the Mississippi river when they noticed the passenger train speeding towards them. The younger of the two undertook to outrun the train, and sueceeded in gaining the end of the bridge and clearing the tracks just as the speeding tram flew by.
The other plunged Into the icy waters of the Mississippi about fifteen feet below, and was floating steadily to almost certain death over a cataract only few yards away, when Swayne, risking bis own life, plunged into the water and helped her to shore There, rescued and rescuer were assisted from the water by willing hands, and everything possible was done for them. Both were attended by Dr. Downing, who found them to be suffering from shock and cold.
Like Scene in “Movies.”
The episode resembled a thrilling moving picture escapade more than reality. The two girls were walking across the bridge chatting good-humoredly and then, in an instant, there was a scream, as they became aware of their danger.
Annie wore a heavy fur coat, and this possibly would have handicapped her had she decided to run with her sister. This, however, helped to keep her afloat on the river until her rescuer succeeded in reaching her.
The girls’ escape from being run oown by the train and the plunge into the water was witnessed by workers in the upper floors of the Bates and Innes, woollen mills, which are located alongside the river. An alarm was spread through the building, and reached Swayne as he stood in tbe plant office, preparing to go home after having completed his day’s work.
Carried Towards Falls
Without hesitating a moment Swayne slipped out of his coat, trousers and boots, rushed from the building and on to the river bank and plunged in. The suddenness of his plunge chilled him to the marrow, but on he went, swimming and struggling through the slush which covered the open water.
As the girl, floating near midstream, was slowly being carried towards the falls, Swayne’s fellow workers and others who had gathered on the bank held their breaths as Swayne matched his skill at swimming with the swiftly running current.