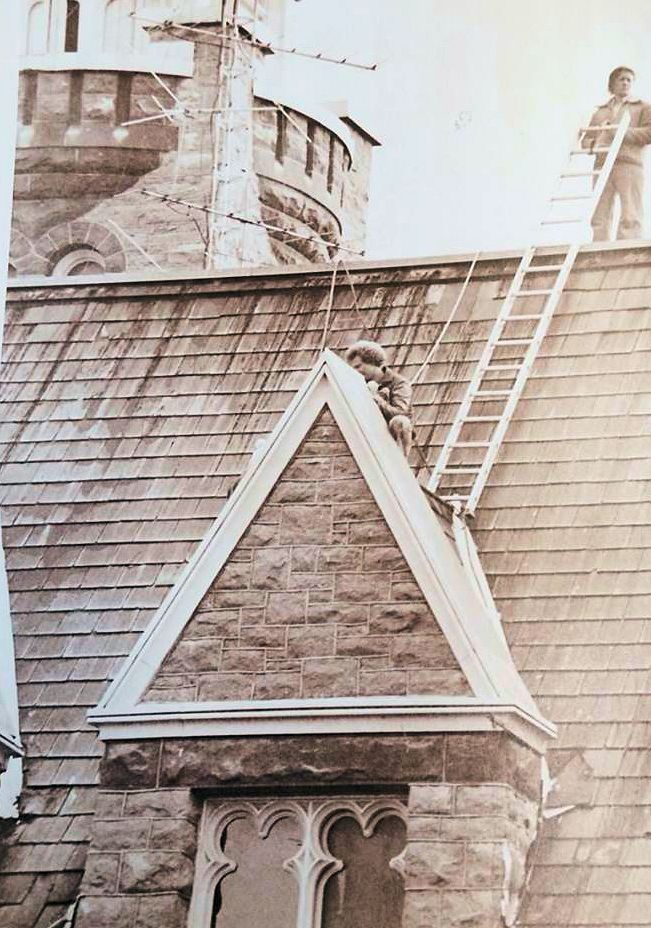 Town Hall Photo…The Carleton Place and Beckwith Heritage Museum has boxes of photos from the old Canadian basement that Jennifer Fenwick Irwin rescued. This is another one of the old treasured photos from times gone by.

The other day I was up on the stage gazing at the beautiful auditorium and I felt like all I needed to do was sit on the floor and I could slide to the end it. The floor is so slanted you feel like you are walking a 35 degree angle (someone said more like a 3.5).

I immediately thought the floor must have sunk and it needed massive repairs. Well, I was wrong. That floor is heritage designated along with the building because that is how they used to build stage floors. It is one of the few remaining raked stages in Canada, fine examples of woodwork in pine and ash, decorative pressed metal ceilings and mosaic encaustic flooring.

English theatre stages in the Middle Ages and early Modern era typically sloped upwards away from the audience. This is known as a rake or raked stage and improves the view for the audience. Raked stages can still be seen in many opera productions, where a temporary raked acting surface is built over a theatre’s permanent flat stage. Creating a raked stage can also assist set designs requiring forced perspective.

The term:”upstaging” refers to one actor moving to a more elevated position on the rake [stage], causing the upstaged actor (who stays more downstage-closer to the audience) to turn his back from the audience to address the cast member. The term “upstaging” also has since taken on the figurative meaning of an actor unscrupulously drawing the audience’s attention away from another actor.- Wikipedia

All the world is a stage but we are so fortunate to have a piece of rare theatrical history in our town.

Dan Williams
When I was a kid the town hall including the auditorium was wide open. You could go in and discover stuff!. The balcony was a great place to go, or behind the stage which was pretty much unused spaced sort of like the attic in an old house. You could however make your way to the tower! Fun times! The other thing I remember about the auditorium is the annual Fireman’s Ball. I was just a kid but I remember being there and hanging around in front of the stage listening to some country band playing “On the wings of a snow white dove”. I hated country!