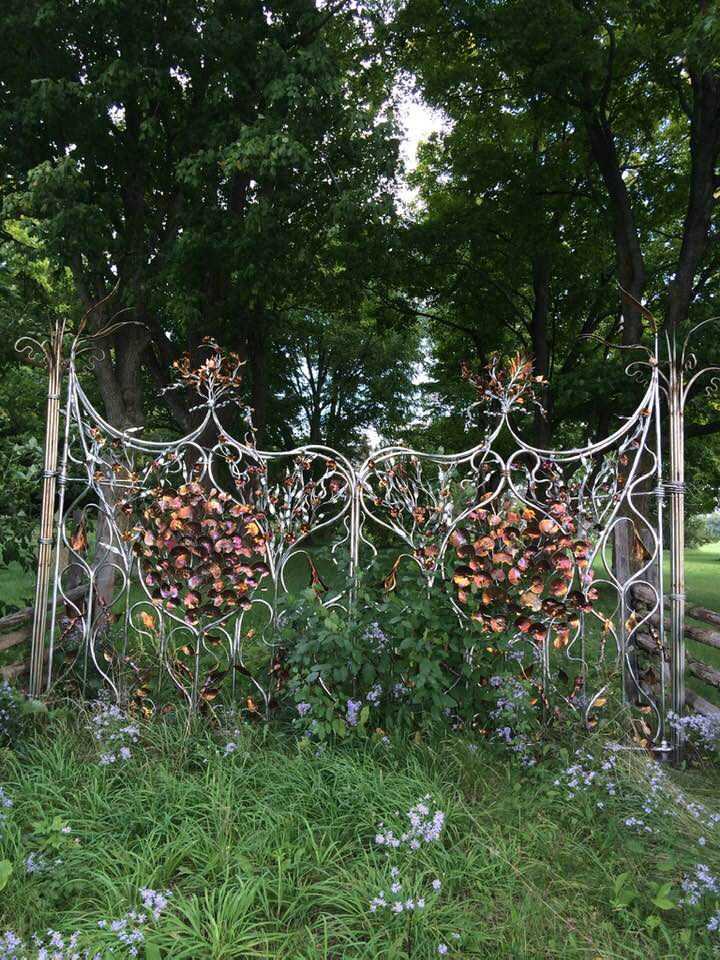 see description below of these gates.

There are magical things that dance about the fields and towns of Lanark County.  There is no doubt there are tales to be told. I do not know who builds these fences throughout our county, but one day  I hope to meet this magical artist. Each time I pass these pieces of mystical art on the Appleton side road, and in Almonte, I stop to take pictures. They take my breath away. My friend George Lanzon calls them “Dreamcatcher Gates”.

I encountered an incident a few years ago that only that faeries could have done. A real magical true love story. Have you seen any faeries out and about? PM me..

She sat there quietly at the memorial and remembered their past. Thirty years had gone by too fast, and now he was suddenly gone. What would she do without him?

While she wept softly, a crane walked slowly beside the white picket fence. He was watching her carefully as the wise flower elves wept in the hollows. How could he explain to her that he was there?

Flying over the fence in a gentle swoop, he felt the drops of dew, and kissed cold tears fromthe grass. Was it really a crane, perhaps it was a faerie in disguise?

He tried to get closer to her with one measured step at a time. The grass blades parted with sighs as he was trying to tell her that he was there. He had been gone for a few brief days but had returned to tell her that he loved her. Yes, he would always remember the joy from the life they had shared together.

He stopped during certain moments when people spoke of the love they had for him. Cocking his head from time to time he listened to words of memories and laughter. Attempting to make a sound so she might turn her head;  a silent noise filled his throat, and she would never know he was there.

Three people watched him closely from their seats, and he knew they realized who he might be. They had already decided that he was not really a proud graceful crane walking across the grass – he was simply the departed, trying to tell his wife he was okay.

The spoken words of love suddenly stopped, and everyone became silent. The crane knew he must go; but somehow must tell her that he had read the beautiful card she had made just for him.

“The heavens part the high planets, blade parts back and edge; not even eternity can part souls that are sealed in love.”

“Yes”, he thought. Eternity will never separate our souls as we are forever sealed with love. Remember that my darling; never ever forget.”

And with that, as quickly as he had appeared, he was suddenly gone.Those that had seen him spoke quietly, and told each other their thoughts. They knew that when the heavens had grown clear, he had come.

His soul had descended when the mountain brims grew bright to speak of his eternal love. Others would tell her later that he had been there to silently tell her that he loved her one final time.

We saw him Johanna, he was there.

The words are written by me – BUT  I also used a handful of selected words used in a scattered “here nor there fashion”  from the card Johanna had made for her departed husband, Bruce. I believe she used some of the selected words from : Journey’s End (Ferdalok)

On the Appleton Side Road on the way to Almonte

Those gates are on the farm where we lived until 1994. It was one of the original Duncan farms, purchased by Robert Duncan Jr about 1846. It was originally designated a clergy reserve. There have been a couple of owners since we left the farm. The gates were built by Giussepe Lund, husband of Jane Bidgood formerly of Carleton County. I think they make their main home in England. Giuseppe has many significant metal sculptures around the world, including the Queen Elizabeth Gate in Hyde park London. Check out his website metal garden.ca