Dusty Pettes is not on the Food Network, but he cooks like he should be. You probably have seen him shopping for produce at our local Farmer’s Market in Carleton Place for Ballygiblin’s on Bridge Street  His idea behind the Ballygiblin’s menu came from wanting to use as many of the great local farmers from the area and feature their ingredients in his dishes.

I think we in Lanark County need to be behind this, as running a farm in today’s agricultural market is now very difficult; to make a profit you have to operate on a massive scale. That has caused a lot of young people to throw up their hands and walk away from the family farming business. Agriculture college enrollment has dropped 75% and there are more people getting out of farming than going into it.

So why should we care about Dusty using our local Lanark County products for Ballygiblin’s?  Yes, because, farming is the base of our country, and without secure food grown by local farmers we could be in a deep mess some day..

So Dusty has agreed to have a weekly column and this week’s recipe is Pig Candy. Nothing but Bacon jam made by slow cooking a combination of bacon, onions, brown sugar and vinegar, then blitzing the mixture in a food processor and putting into jars.  Yum! 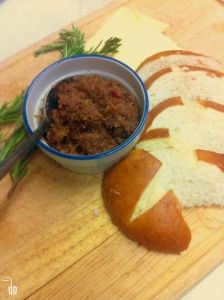 I love bacon, bacon is great with anything. I know that might be a little cliche but I am a firm believer of the power of the pig and all it’s yummy bits and pieces. In an effort to maximize my consumption of the swine I started to make bacon jam, yes bacon jam. I wanted it to be a little spicy, a little sweet, a little bitter and a little salty to maximize the 4 flavor regions of the tongue.
Here is what I came up with:

2. Dice the onion and cook in a pot  with a little oil. Then add the bacon.

3. add all remaining ingredients and bring to a simmer for about an hour.

4. puree the mixture (leaving it a little chunky)

Note this is a batch recipe and can be scaled down to size.

Tilting the Kilt, Vintage Whispers from Carleton Place by Linda Seccaspina is available at Wisteria at 62 Bridge Street, the Carleton Place Beckwith Museum in Carleton Place, Ontario and The Mississippi Valley Textile Mill in Almonte.  available on all Amazon sites (Canada, US, Europe) and Barnes and Noble