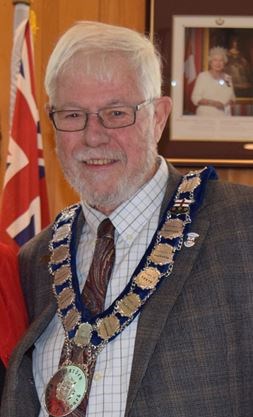 This is Bill and he has a hobby that some might not understand. You see Bill collects early folk art that some not in the know might just call junk. The word “folk,” according to etymological dictionary, means “of the people”, and one would say Bill is “of the people” more than anyone knows. Not only is he the Reeve of Montague Township he probably owns the cream of the crop in antique farming tools in the province of Ontario.

This is Bill’s home that he and his wife Linda Hynes own that was the site of the Lanark County Plowing Match. I mistakenly drove into his yard last week and was really glad I did. Bill is one of those people that when you start talking to him you feel like you have known him forever.

In 1985 Bill decided that after 30 years of collecting he was going to open a museum so all the world could see the beauty of the primitive items of yesterday. If you look at the things he has collected, you will have to admit the people that originally created these things were artists. After all most were made by rural or small town untrained individuals, whether they be signs or farm tools. All were created by hand with love and without machinery.

In the 80’s when I used to sell depression glass, my main customers were Americans who bought almost everything you had to offer. Some Canadians became concerned they were losing heritage items to south of the border so there seemed to be an immediate rush to hoard these items before they disappeared out of the country. Bill seems to think it was some sort of media hype but I saw the speed in which I sold the stuff as more than a passing interest.

In the 80’s when the full full-fledged contemporary folk art boom emerged with major exhibitions at prestigious museums, Bill started finding old toolboxes in which he picked the cream of the crop and sold the rest. And so began in the same period of time Mr. Dobson’s quest to open a museum of primitives in the summer.

Sad to say when your name does not contain the words “American Folk Art Museum” it’s pretty hard to get people to come visit a tiny museum on a back road called Mattheson Road in rural Montague Township Ontario. To those that are always afraid to live outside the box, you are missing not only the best in primitives but also missing the best curator I ever met. I know of no museum in the world where you can talk with someone that is so passionate and knowledgeable in what he does.

“Sixty people came the first day to his museum and then a total of sixty people for the next two years.”

Disappointed with the lack of interest he closed it down after the second summer. And so the museum stayed closed but he never gave up his love of collecting.

This year he decided to open the doors once again to the public. You will see no commercialism, consumption, or exploitation from Bill in this display – just honesty, beauty and knowledge. Sigmund Freud believed that collectors had object fixation related to the anal-retention stage in childhood. I dispute this as someone has to keep history of the ages alive.

Bill told me he had a quilt that came from an auction that was held at my house almost 30 years ago. He asked me if I was interested in buying it. I explained to him that no one would appreciate it and my days of collecting are long gone.

I used to volunteer for a Hospital thrift shop where people would donate their homes to the hospital charity. I went  into went so many homes after the owners had died to appraise things and their children did not even want a token from it.

There were some wonderful things but also useless belongings were piled high to the ceiling. Sometimes it seemed to grow like a monster and even extended into the garages and verandahs. I would appraise as much as I could but was just could not understand how no one cared in the family about bits and pieces of history. That was a huge force along with my house fire to stop collecting.

Thankfully we have people like Bill and others to collect items of history and treat them with respect. Letting him share these personal connections to the past with us allows us to hold pieces of history literally in our hands. That kind of thing is priceless!

So as the sun sets over Montague Township, the iron weather vane knows he is safe in Bills hands and will never be sold to anyone. People with passion like Bill would never allow that. Not allow it indeed!

“It’s the same thing as the antique furniture. I just don’t like old stuff. I’m creeped out by it, and I have no explanation why…I don’t have a phobia about American antiques, it’s mostly French—you know, like the big, old, gold-carved chairs with the velvet cushions. The Louis XIV type. That’s what creep me out. I can spot the imitation antiques a mile off. They have a different vibe. Not as much dust.”

Photo of Bill Dobson from Google/EMC ( I forgot to take one of him:(