My mother had just packed my clothing in the old brown suitcase she had come from Ireland with. I had decided to leave school and was going to see if I could get a job at the Rideau Hotel in Smiths Falls. I had seen an ad in the local newspaper boasting about airy rooms, modern conveniences, fine food and I was sure I could find myself a place.

My mother kissed me goodbye as I boarded the old Pembroke local Arnprior #2518 and hoped we would make good time to Smiths Falls. The smell of the train was horrid as the wooden cars were overloaded with holiday travellers and the train was leaking. We stopped and stalled many times and the conductor told us we were an hour behind schedule and the groans in my car were louder that the roar of the train whistle.

Finally we arrived in Almonte at approximately 8:40 pm, and I let out a sigh of relief but had no idea there was danger in the air. I had no thoughts that a 10 steel car troop train was heading our way and our train should not be at the station. No one knew that the local train crew did not send a flagman back along the tracks nor did anyone place a torpedo on the rail to warn the approaching troop train that was heading to Stittsville. Someone later said that they saw the light of the train as it crossed the trestle over the waterfall and by the time the engineer spotted the lights of the oncoming train some of our lives were about to be cut short. I was seated in the last coach as the powerful CPR 4-6-4 Hudson #2802 hit us dead on. All I remember was a loud roar, bright lights and then I was gone as the locomotive barreled through our car and on to the one ahead of us. 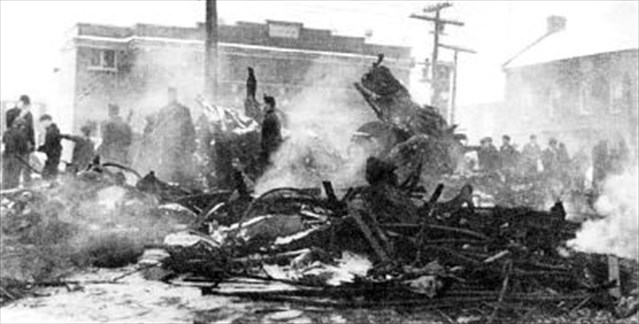 Some say the brakes of the troop train failed and slid down the icy rails that night. Thirty-six of us died and over were 200 injured as the sleet and the snow came down like icy tears. As I  looked down over the train wreck 30 minutes later I saw what was left of my body being brought into the local Post Office. I knew my mother would be devastated to lose her only child and hoped they might find my suitcase so she would have something to remember.

There would be no job at The Rideau Hotel for me or continuation of a promising life with family. All I could do was look down and sing, “When Irish Eyes Are Smiling” as I watched the death list mounting below me. I knew I would haunt the Almonte Post Office for the rest of my life as I was one of 30 whose life’s lamp untimely went out that snowy night on December 27, 1942.

Despite immediate emergency service from as far away as Ottawa, 36 people died and over 200 were injured. Bodies were packed into the basement of the old Town Hall and the Post Office. It’s said that the Post Office is still haunted by the ghosts of the dead – 64 years later.

Private photos were taken by Wilma Munro, of Almonte, with her “Brownie” camera in 1942.  She had many copies made and sold them in McDonald’s Store, Almonte, Ontario for 5 cents a copy. 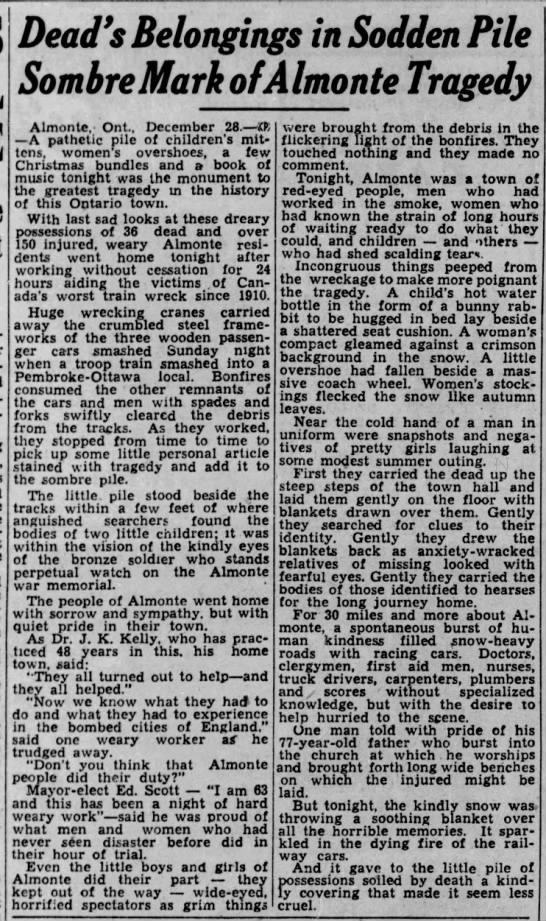